The patient readers may learn something about the discrete structure of spacetime at very short distances. 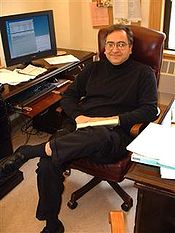 Yesterday Cumrun Vafa gave a cute colloquium at Harvard. The relevant papers are
Shiraz Minwalla introduced Cumrun as a new category of a physicist. Most theoretical physicists Shiraz knows may be classified either as mathematically oriented people; or as physically oriented people. Cumrun belongs to a third category: he is a magician because he sees the truth directly, Shiraz explained.

Cumrun worked with a PowerPoint presentation that included a lot of animated pictures. As a true artist, he drew mathematics (for example, the integral signs) by hand. Well, we will have to fix this imperfection. ;-) Cumrun described Isaac Newton, apples, Albert Einstein, general relativity, and so forth. I assume that most readers don't need to hear this part. As an anonymous pal below has pointed out, Cumrun Vafa has also shown photographs of string-theoretical experiments taken at Harvard, including the pants diagram encoding the stringy interactions. :-)

The first observation related to his main topic was the concept of quantum foam - a weird, bubbling, fluctuating, topologically non-trivial picture how Wheeler imagined that the spacetime looks at the Planck scale, about \(10^{-35}\) meters. Relatively speaking, the quantum fluctuations become very large at very short distances. In general relativity, the geometry is dynamical, and therefore the distances - but even the topology - fluctuate frenetically.

String theory is a consistent theory of quantum gravity and it allows us to calculate finite scattering amplitudes (from infinity to infinity), but it is not straightforward to "see" how the quantum foam at the very short distances looks like according to string theory. The reason is that the strings' typical length is close to the Planck scale, but it's not quite the same thing. The typical size of the oscillating strings is\[

\] where \(a\) is a positive exponent. Because the coupling constant \(g\) is much smaller than one in the regime where we can make easy and accurate enough calculations based on strings as fundamental objects (because their interactions, measured by \(g\), are weak), you can see that \(l_{\rm string}\) is much longer than \(l_{\rm Planck}\). Strings regulate the space at the string scale. Geometry is heavily modified by new string physics already at \(l_{\rm string}\), and you don't really see what's happening at much shorter distances such as \(l_{\rm Planck}\).

You may also argue that \(g\) may be of order one and then the string scale and the Planck scale coincide. That's correct, but if \(g\) is roughly equal to one (or higher), then strings are strongly coupled (they split and join frequently) and they're not the best degrees of freedom to describe physics - and it becomes more difficult for us to say what the physics actually looks like.

Nevertheless, one can ask: can you apply more sophisticated tricks to see what's going on at the Planck scale? Cumrun et al. gave the answer "Yes" in a simplified version of string theory called topological string theory. (Note that this blog recently discussed other works by Vafa et al., for example the so-called topological M-theory as well as the paper on the "entropic principle".) This theory has no propagating degrees of freedom in the bulk; it is nevertheless analogous to the "full" physical string theory. In fact, topological string theory may also be viewed as a tool to calculate a subset of physically interesting results in the full string theory - those that are "holomorphic" and whose values are "protected" by supersymmetry (which means that an easy calculation is guaranteed to be exact because supersymmetry ensures the cancellation of all corrections).

Geometry of the problem

OK, so take topological string theory in \(\CC^3\), i.e. a flat six-dimensional space with a complex structure, and compute its partition sum - which is about the best thing you can do with this theory. The partition sum may be interpreted in the full theory as a prepotential, roughly speaking, and it is a function of the string coupling \(g\) as well as the parameters that describe the shape of the six-dimensional spacetime (Calabi-Yau); the latter variables are missing in the case of \(\CC^3\), and therefore the partition sum is a function of \(g\) only. According to the approximation of Einstein's low-energy gravity, the space looks like the naive space we know. However, according to perturbative topological string theory, the space is slightly modified near the origin (yes, in this particular context the translational symmetry is broken).

Instead of the complex coordinates\[

\] and the corresponding angles\[

\] The complex structure on \(\CC^3\) also includes the information about a symplectic structure (the kind of structure that determines the Poisson bracket on phase spaces), and \(p_j\) and \(\theta_j\) are canonically conjugate, much like the position and momentum in quantum mechanics.\[

\] That was boring. Now realize that \(p_j\) are non-negative numbers, and therefore they "live" in an octant of a three-dimensional real space. At each point of this space, you have a three-dimensional torus spanned by the angles \(\theta_j\). This is an awkward way to draw a six-dimensional space - the method is called toric geometry. At the boundaries where at least one of the quantities \(p_j\) vanishes, the corresponding circle \(\theta_j\) shrinks to zero size, which is necessary to assure that the six-dimensional space has no boundaries.

Once we described the six-dimensional space in this weird "toric" way, we may calculate the partition sum using perturbative topological string theory. We will find out that it is dominated by a real two-dimensional surface\[

\] embedded into the three-dimensional space parameterized by \(p_j\). It almost copies the boundaries of the octant. However, near the corner, the surface deviates a little bit and becomes smooth. (You need to look at the papers to see a picture.) It deviates roughly by a distance related to \(l_{\rm string}\).

Imagine that you calculate the partition sum. In perturbative string theory, it is a power expansions that involves various Riemann surfaces of genus \(h\) where \(h\) plays the role of the exponent in the perturbative expansion (the number of loops). You re-express the complete sum in terms of a different variable \(q\) related to the string coupling \(g\) by \(q = \exp(-g)\), and what you get is\[

\] I don't want to write all the terms because I don't have an infinite amount of time right now, but the funny thing is that you can show that the full result is McMahon's function which can also be written as an infinite product:\[

\] That's very funny because the same function appears in statistical physics of a melting crystal; you can call this other context "condensed matter physics" which shows that a piece of sugar is made of quarks that are made of strings that are oscillations on spacetime that is made of sugar again. ;-)

Why does the function appear in the context of crystals? Imagine an infinite crystal made of atoms (cubed lattice) and try to melt its corner. The rule of the game is that you can only remove the atom whose three faces are visible if you look from the direction of the corner of the crystal - I mean those three faces that contain the equally oriented corner of the cube (atom).

The physical picture is clear. The preferred shape of the surface Sigma discussed above is just a macroscopic, averaged approximation of a microscopic, "atomic" shape that is allowed to oscillate. The size of the "stringy shapes" is of order \(l_{\rm string}\) while the atoms of the crystal are much smaller: \(l_{\rm Planck}\) which in this case is of order \(g\cdot l_{\rm string}\) where \(g\) is a small value of the string coupling constant.

In the thermodynamic limit, the typical shape of the atoms that contribute to the partition sum of the melting crystal approach the shape Sigma. Moreover, every configuration of the atoms may be associated with a unique, non-trivial topology that asymptotically looks like \(\CC^3\), but one that contains non-trivial handles and bubbles in the middle; the general geometry may be obtained by a sequence of "blowups" - which is a process that removes a point from the manifold and replaces it by a complex projective space (a kind of sphere).

Let me re-iterate the interpretation of the partition sum again. There are two ways how to calculate the partition sum in topological string theory. One of them is a Taylor expansion in the string coupling constant \(g\); the powers of \(g\) are called \(h\) and the coefficients come from the Riemann surface (worldsheet) of genus \(h\). String theory expansion sees no discreteness whatsoever.

The other way is to sum over all possible allowed "bubbling" geometries. Each of them is uniquely associated with a configuration of atoms - a three-dimensional Young diagram or a melting crystal. Although the bubbling geometries are smooth, they can be described by discrete data. The discreteness is one of the features that distinguishes Cumrun's crystal from the bubbling AdS spaceof Lin, Lunin, and Maldacena which is otherwise remotely similar; in the latter (AdS) case, the corresponding topologically non-trivial geometries are described by a continuously infinite number of continuous parameters. On the other hand, the values of \(p_j\) in the crystal geometry are kind of quantized because they're the canonical momenta associated with the periodic coordinates \(\theta_j\) and everyone who knows quantum mechanics on a circle can say what it means for the momenta. Note that the crystal does not directly live in the six-dimensional space but rather in its three-dimensional simplified "toric" caricature.

The main question is, of course, whether these intriguing dualities between different systems only hold for topological string theory, or whether they can be extended to the realistic, physical string theory - the theory that contains the Standard Model, gravitons, as well as all other qualitative ingredients to match the real world. That's of course a big question. Cumrun says that he sympathizes with the "words" that various discrete people - like loop quantum gravity or perhaps even Ed Fradkin ;-) - are using; they just use the wrong math.

However, in the full physical string theory, we must first of all deal with a richer spectrum of different scales; \(l_{\rm string}\) and \(l_{\rm Planck}\) are not the only possibility. Various probes, objects, D-branes, other branes are sensitive to distances of different orders which indicates that if the crystal picture may be generalized at all, there will probably be a large number of subtleties. Also, in the full string theory one wants to restore the full rotational (and Lorentz) invariance, and therefore the "arbitrary" separation of the coordinates to complex coordinates (and subsequently to their absolute values and angles) is not doable. It is also reasonable to expect that some quantization rules from topological string theory won't hold in the full string theory, and the discrete character of the description will disappear anyway.

The frequent readers of my blog know that I am convinced that there exist very general arguments indicating that no discrete structure embedded in spacetime can be compatible with a Lorentz-invariant theory that includes local excitations. But I am open-minded about some completely new loopholes that may avoid these problems. However, all the examples of discrete spacetimes I have seen are incompatible with the desired low-energy limit.
Luboš Motl v 2:27 PM
Share