According to nos.nl and their nearly final results, 61.6 percent (according to exit polls, 63 percent) of the Dutchmen have voted the EU constitution down in their consultative referendum. In other words, most of them were "TEGEN" the document and only 38.4 percent were "VOOR". Note that 94 percent of the Dutch Parliament supported the constitution. I think that these two facts already indicate that there is something wrong about the way how the current political elite in Europe "represents" the population. 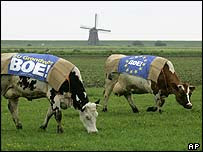 The turnout about 62.8 percent was safely above the 30 percent level that was necessary for the politicians to accept it (and higher than the turnout during the last elections to the EU Parliament), and the victory was well above the 55 percent that were needed to define a "clear result".

The Dutchmen had different reasons to vote against the treaty from the French, and many (but not all) of them are closer to my opinions:
There have been several factors why the victory of the "NEE" camp has been stronger than predicted - and two of them are related to the results in France:
What should happen now?

First of all, we should realize that although the situation is unexpected for many people in Europe - who have apparently assumed that the result of every referendum must be YES and there is no reason to even prepare for a NO - it is not a disaster. As Vaclav Klaus said, Europe has existed for 50 years without any constitution and it will continue for 50 more years without a constitution.

The responsible people in Europe should obey the law and the international treaties. According to some of these treaties, the EU constitution is now a dead document. No doubt, the integration process of the EU will be slowed down. It is very irresponsible if some politicians try to indicate that the clear results in Holland and France may be neglected or circumvented. Such an approach would contradict the law, and it would provoke even bigger violations of the law by the other side, and so forth.

I find it reasonable to save the money for the referenda in the other countries.

In a couple of years, I am confident that there will be another, less ambitious and much shorter document that may be acceptable for most citizens of every country of the EU - but no one should assume that the ratification is gonna be automatic or a formality. Such a document should be roughly 10 times shorter than the draft rejected by the French and the Dutch. It should not say anything about the economic and other policies. It should by default allow the nation-states to control their immigration, tax, social, and other policies, and many other policies that the authors of the draft wanted to move to Brussels - but such a move was found highly problematic by the voters - should stay in the nation-states. The system should be flexible enough so that every member should be able to exit some of the individual policies if the national parliaments - or the referenda - decide so.

Most importantly, there should now be a serious discussion about all these things - a discussion in which all opinions must be heard and all worries must be seriously addressed. Do we really want to decide about XY together? Is it a better or a worse option? Does the unified Europe strengthen or at least preserve democracy?
Luboš Motl v 9:02 PM
Share