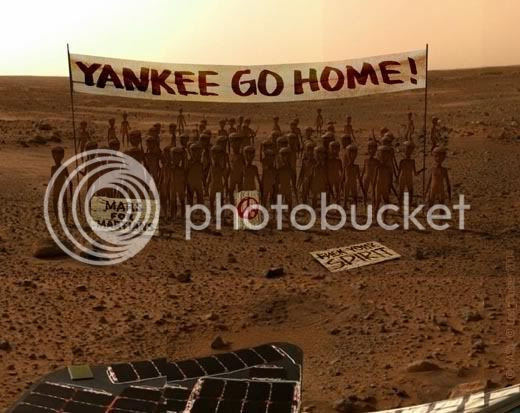 See also: Global warming on other planets and moons

This picture showing how the natives welcome Spirit is not the only evidence that there are humans living on Mars. What's the new evidence? As you know, global warming is caused by the humans; it can't be of natural origin. And global warming was just identified on Mars; BBC says that "climate change is in progress". The polar cap is retreating at a prodigious rate (1.5 meters per terrestrial year, nearly 0.01% of the Connolley rate). It follows that there must be Martians over there. How exciting! ;-)

An alternative explanation is that the White House and NASA are already building factories and power plants on Mars.


The scientists who have not yet seen the image above say that "they have no explanation why Mars is warming". More seriously, don't you think that it should be easier to predict the climate on Mars than the climate on Earth? Don't you think that the right scientific approach is to learn how to predict the future in simpler, more controllable environments, and then try something as complex as the terrestrial climate? Despite various charlatans who predict the weather in 2050, we have not made the first steps yet. A scientific conclusion about the new data simply says that the climate at generic planets is probably changing pretty rapidly because of natural forces.

The idea that the humans are a significant contributor is a pre-conception that has never been independently justified. On the contrary, it naturally predicts (although this statement is just qualitative) that the planets without humans should have a more stable weather. Such a prediction has just been falsified.
Luboš Motl v 3:03 PM
Share