Steven Weinberg is an exceptional physicist. He not only gave the name to the Standard Model, but he also discovered it - in the old era when it did not include QCD yet. He has made lots of other discoveries and he is still "in" and he even follows the very technical recent discoveries in string theory. Many of us have read his popular books such as The First Three Minutes and Dreams on a Final Theory and they influenced us tremendously. 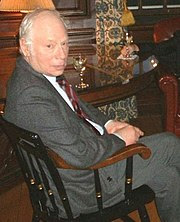 One of his controversial but equally successful predictions was the prediction of the rough size of the cosmological constant assuming the galactic principle. If cosmology allows the galaxy formation, the cosmological constant can't be too large because the space would expand and dilute too quickly, before the clumps can be created by the gravitational pull. But it definitely can't be too negative either because the Universe would approach the Big Crunch too early.

There is an allowed window - the anthropic or galactic window - and the measurements in 1998 confirmed that our Universe seems to be somewhere in this window on its preferred, positive side. Although I am sure that Weinberg hates the idea of the anthropic principle deeply in his stomach and mind, he decided to accept it. And because his comment about the cosmological constant is the only at least partially and superficially successful prediction of the anthropic principle among those that can't be explained more accurately, he became a true prophet of the Anthropic Church. In his opening talk
Weinberg presents some novel ideology to support this principle. The biggest revolutions of physics not only answer questions in new ways, but they even change the classification which questions are important and well-defined. And the anthropic principle and the landscape seem to be doing something similar, he argues. Asking for an explanation of the values of the parameters of the Standard Model is equally meaningless as asking how to describe the interior of an electron or how to explain that aether causes no winds, Weinberg suggests.


Many people such as David Gross - or your humble correspondent - often tend to compare the anthropic principle to the religion because they share many important features. The main common feature is that the most important insight is determined a priori and it is a universal answer to many questions: there is either God or googols of Universes. Because this is a dogma, no insight can really falsify it. And this dogma justifies the viewpoint that we don't have to look for more detailed answers to the unanswered questions.

Not surprisingly, Steven Weinberg's opinion differs; the happy marriage between some recent anthropic trends in physics and religion, as supported by the Templeton Foundation and others, it not appreciated universally. Weinberg presents the anthropic principle and Christianity as big enemies. At the end of his talk, he quotes a powerful religious guy who is publicly afraid of Darwin's theory as well as the multiverse. And because Weinberg is probably the most well-known outspoken and radical atheist in the world, together with Richard Dawkins, he argues that the priest's emotions themselves are a good reason to look at the anthropic principle seriously. :-)

If someone says that there is no "microscopic", "deeper", or "quantitative" explanation for the properties of the species or the values of parameters in our effective field theories, I don't care much whether she explains that it's because these things are designed by an Intelligent God or she argues that the properties were chosen from a vast selection of Universes. The physical consequences are isomorphic: we can't predict and analyze the system at a deeper level. If I could choose among these two similar pictures, I would probably choose God because She at least cares about us, unlike the cold but otherwise equivalent multiverse. ;-)

Weinberg has made a very good guess about the cosmological constant - he has found an indirect argument that can impose both lower and upper bounds on the C.C. But it certainly does not mean that there can't exist a more accurate, quantitative calculation that determines its values - much like it exists in thousands of other contexts - and it certainly does not imply that Weinberg's semi-quantitative argument should become a template according to which new conjectures and insights about Nature should be created.
Luboš Motl v 5:05 PM
Share