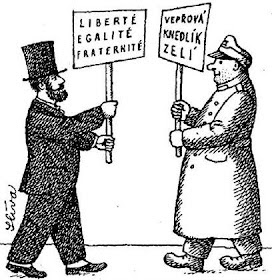 The slogan says "Vepřová-Knedlík-Zelí" or "Pork-Dumpling-Cabbage" which is a Czech national dinner, in combination with Pilsner beer. Well, I guess that this joke by Jiří Slíva describes not only the Czech national character but many other characters, too.

Bill also told Larry to create a diversion. "Try bombing Bosnia, or MIT." Click here for more details, here for protests of the Jewish farmers, and here for a poetic protest by a department at Harvard. Another press release informed that a Harvard professor proposed a new introductory course, "Introductory Voodoo economics" to assure that alternative theories of economics, not just those that work, are being taught. :-)
Luboš Motl v 5:46 PM
Share