Steve Hsu has found a very interesting table with the average GRE scores computed for various concentrations. He has also defined a linear map translating the average V-Q-A scores into a more familiar IQ scale. This convention looks natural to me and I will follow his scale although it is not guaranteed that it is equally calibrated as other IQ measurements.

Disclaimer: these cold numbers expressing typical IQ for different occupations must be interpreted very carefully. They don't necessarily imply anything. The outcome depends on the character of the question, discrimination, etc. Despite different numbers, all of us are equal. Blah blah blah. And so on.


If you trust these numbers, one of the conclusions is that the economists are the brightest among the social scientists (rank 4) who are only followed by philosophers (rank 9). The philosophers are still brighter than political scientists (rank 17) who are smarter than the sociologists (rank 23). This list may confirm virtually all of your preconceptions about all these fields, at least it was my case. The only exception was medicine that I expected to appear in the upper half. 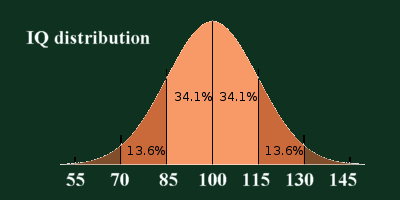 You may also want to study the table of average IQs in individual nations. As a Czech – a guy from a nation whose average IQ is just 98 – I may still use my personal IQ of 187 to safely predict that you are Japanese, i.e. a member of one of the 5 smartest nations whose average IQ is 105, and even play Kimigayo for you. ;-)

There is a whole IQ category on this blog with 30 articles which are dedicated to intelligence, especially the IQ differences between the two sexes.

The IQ of a field seems to be slightly negatively correlated with its hotness. Click the graph for a source with some extra information.
Luboš Motl v 2:19 AM
Share