You should first open this PDF file (600 kB):
What you see are pages 12-13 of the Time magazine for the week of December 26th, 2005 - January 2nd, 2006. American express interviews various holders of their credit cards. This one is no one else than Mike Lazaridis, the inventor of BlackBerry. His wildest dream is to unlock the mysteries of the Universe. His proudest day was the day on which the Perimeter Institute was opened - and surely, Mr. Lazaridis has a very good reason to be proud.

He will have an even better reason to be proud when the final equation describing the Universe will be completed during a debate with his scholars at the Perimeter Institute. 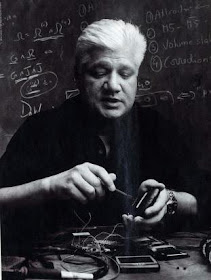 What you see is actually the Gukov-Vafa-Witten superpotential and its various counterparts, together with a procedure to construct some KKLT-like vacua. These expressions on the blackboard were written by Melanie Becker when she visited the Perimeter Institute and she has offered some amazing stories about them. For example, when she wrote the second form of the superpotential "G /\ J /\ J", Cumrun Vafa, despite being a genius, had argued for several days that it was exact! Of course, Melanie Becker knew better. The superpotential "G /\ J /\ J" receives worldsheet instanton corrections although "G /\ Omega" doesn't.