Jefferson Physical Laboratory where we have offices has been declared a historic site by the American Physical Society, mostly because it is the first building that was ever built in the U.S. for physics research. 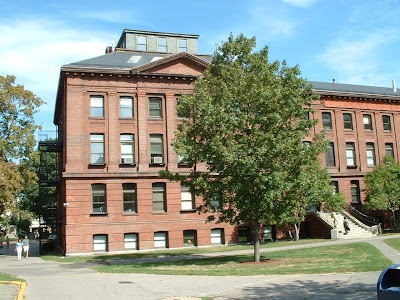 Figure 1: The picture is mine

See the letter that President Lawrence Summers and the department chair John Huth received here. The picture above is from 2002 but you already see the new attick which is pretty these days. Recall that it is exactly this Jefferson tower where the first gravitational red shift experiment was done by Pound, Rebka, and Snyder in the early 1960s. Its 22.6 meters were enough to measure the 4.92 x 10^{-15} relative change of the frequency of 14.4 keV gamma rays from iron-57. The prediction of general relativity - of a red shift factor "(1+gh/c^2)" (verify the numbers!) - was confirmed with a 1% accuracy.