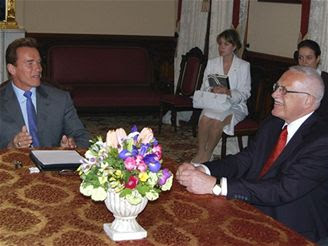 Figure 1: Californian leader Schwarzenegger with his Czech counterpart during a friendly encounter in Sacramento. Arnold has accepted Klaus' invitation to the Czech Republic.

When Czech president Václav Klaus visited Harvard, he complained that the capitalism of the European Union is not the genuine capitalism the he always believed - the capitalism as taught by the Chicago school - but rather a kind of distorted, socialized capitalism, something that could be taught here at Harvard. ;-)

Finally, he could have spoken to the peers - at the Graduate School of Business at University of Chicago. The other speakers over there agree with Klaus' opinions. In his speech, he explained that the Velvet Revolution was done by the people inside the country: it was not imported. Equally importantly, Americans have a naive understanding of the European unification because they don't see the centralized, anti-liberal dimension of this process.
Luboš Motl v 7:38 PM
Share