As Lawrence Summers likes to say, our era will probably be remembered as an era of a tremendous growth of China and India and perhaps the beginning of their global dominance. Whether we like it or not, Rae. ;-)

China also invests a lot of money to science - in addition to the money from abroad - and plans to learn everything that was originally found mostly in the West, and to become better than the West.


in the New York Times explains how the presence of Stephen Hawking at Strings 2006 is important for the overall spirit of the Chinese people who are becoming ever more eager to take over, just when the enthusiasm for things like capitalism and string theory, among others, deteriorates at many places of the West. 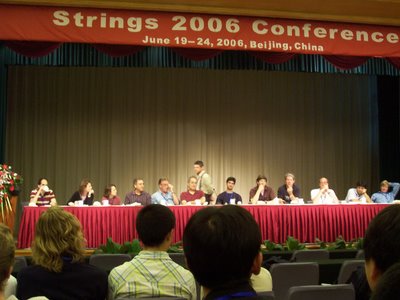 Figure 1: Panel discussion at Strings 2006 with crimson posters reminding me of the Community Party conventions in Czechoslovakia before the fall of socialism. Taken from Jonathan Shock's story about the first day.

While the science-haters become ever more influential at many places of the West, science-lovers start to dominate in China. Science-lovers love Stephen Hawking, too. Also in 2006, as Chinese media explain - even though the media describe the subject of Andy's talk as "controversial string theory". ;-)


Shing-Tung Yau is the chief organizer of the conference and he calls string theory "the cutting edge of curiosity". In China, great individuals can become really powerful. As you know, the previous (and acting) most powerful individual was a tad less excited about string theory than Shing-Tung Yau is. This feature of the single physicist was probably a large part of the reason why China has not yet become the leader in this field and other fields, but I am sure that Chen Ning Yang has brought the world many more positive things than the negative ones.

As Victor Rivelles describes, the audience was completely excited with Andy Strominger's beginning of his talk: it was in Chinese! ;-) Andy learned Chinese during a year that he spent in China when he was even younger than he is today. Rivelles' blog is located at blogspot.com. As you may know, blogspot.com blogs (like mine) cannot be viewed in China: they are behind the so-called Great Firewall of China.

Surprisingly for Rivelles (and me), blogger.com is not behind the Wall, so he could actually create a posting. ;-)

Rivelles liked David Shih's and Ken Intriligator's talks most of all - about metastable vacua in supersymmetric theories. Edward Witten gave an introduction to their Langlands big paper and Cumrun Vafa introduced the swampland. Xi Yin gave the last talk on that day.

The bad conditions for string theory in the China of the past were certainly not caused by Yang only. As Overbye recalls, Mao Zedong denounced Einstein himself as reactionary (see the subtitle of this blog!) and burgeois. Mao has created groups of "scholars" whose task was to criticize relativity because it appeared to collide with the Marxist dogma that the universe was infinite and endless (see also comments about Lenin in Lisa's Warped Passages), eternally embroiled in a sort of cosmic class struggle. :-)

I chose to copy the whole cute sentence about the cosmic class struggle, sorry Dr. Overbye! ;-) Yes, another point of that sentence is that the believers in eternal inflation and a gigantic or infinite multiverse share similar overmaterialist preconceptions as Mao Zedong. ;-) There is nothing that would be completely new going on here.

Overbye argues that the times have changed and the Marxist "cosmocratic" ideas have been moved to the dumping ground of the history and replaced by "technocratic" beliefs of the current Chinese ruling elite.

Andy Strominger also predicts that the Chinese will soon take over because they are so smart they "knock your socks off". ;-) Recall that the average East Asian IQ is higher than the average White IQ by about 6 points. If you find these a priori numbers contradicting some observations, you may want to see La Griffe du Lion's calculations based on the smart fraction theory.