Off-topic: the doubling of the traffic is not permanent. It is caused by thousands of people looking for Mary Winkler's motive again. 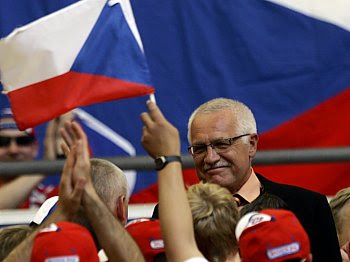 98 percent of the Czech betters believe that Czechia will beat America. America returned to the World Cup in 1990 after 40 years. In their opener, they lost to Czechoslovakia 5:1. But times have changed a bit. Not much.

For U.S. readers: soccer is a strange game that is more popular than baseball abroad in which legs kick a round ball. :-) After five minutes, America was losing 0:1 because of Jan Koller's goal. In the 36th minute, Rosický improved the score to 0:2 and in the 76th minute the same player made it 0:3 which is the final score. However, Koller had an injury. Nevertheless, as other fans say,
As many of you know very well, my support for both teams was comparable, with a slight bias for the Czech team ;-). But such matches are fun anyway and I admit that I have had an extremely good time while reading the colorful reports in the U.S. media. :-) It could be good for America to start to like soccer - that could really introduce the U.S. to the family of other nations. :-)

The Czechs were also leading the off-side score: 9:0 but I don't know what the final off-side score was. According to a controversial computer formula by FIFA, Czechia is the 2nd soccer superpower in the world after Brazil.
Luboš Motl v 5:16 PM
Share