Mirek Topolánek (50), the likely future prime minister and the chairman of the most powerful Czech political party, the center-right Civic Democratic Party, has had an affair with Lucie Talmanová (39) who is a deputy for his party and who is single. 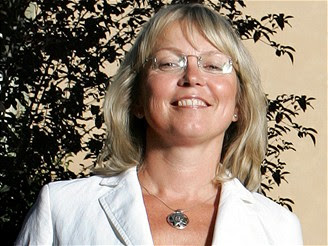 What's unusual is the reaction of his wife, Pavla Topolánková (51) - see the figure - who is a successful businesswoman herself. Instead of selling her husband's wine collection or cutting his tuxedo, she decided to become a candidate for the Senate and to run for a rival political party, namely Politika 21. Politika 21 is a small right-wing party of Jana Bobošíková, a deputy of the European Parliament who has been the main hero of her 2001 battles with lazy, whining, confused, and politically correct journalists in the Czech public TV when she became their boss.

Mr. Topolánek himself says that he is surprised but not devastated because he must clearly understand that he deserves it. Meanwhile, other party officials of his party are furious about the hostile act of the chairman's wife and the British journalists in the Telegraph and the Guardian are grateful for a good story about a new iron lady. ;-) See also a response from Turkey.

A closely related topic: the readers interested in sociology may want to read why the Western-style feminism is not welcome and will not be welcome in the Czech Republic - by gender studies scholars like