The process svchost.exe is doing many kinds of tasks and consequently, there can also be many sources of the error. You have to investigate a bit...

Update from February-March 2007: First, try to follow the instructions at Microsoft KB 931852 related to Windows Update and the Catroot2 folder. If it doesn't fix your problem, try the following recipes, too.

Update from January 2007: Start/Run the command called regedit.exe (Registry editor). Navigate to HKEY_LOCAL_MACHINE\System\
CurrentControlSet\Services\NetBT\Parameters and on the right side, double-click TransportBindName - press delete and give it an empty value. That will close port 445. Also, go to HKEY_LOCAL_MACHINE\Software\Microsoft\OLE and change the value of EnableDCOM from Y to the value N - that will close port 135. If you know how, you may also disable NETbios. Restart the computer and the bug might be gone.

Update: the most efficient way to fix the error in most cases is to install the update offered on this Microsoft page even though this page doesn't explicitly mention the error: choose the update for your correct operating system. It works for 50% of users. Are you among them? Let us know by clicking "fast comments" at the end of the article. 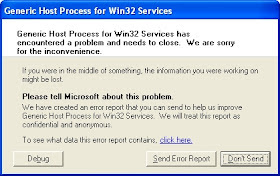 Another hope: Also, 25% of the users can fix the bug by: turning off automatic updates in the Control Panel; going to update.microsoft.com; manually installing the updates there; rebooting. You can turn on the automatic updates again and pray.

If it doesn't fix the problem but you think you have a problem with svchost.exe and Windows Update - e.g. you're getting an access violation error and/or svchost.exe eats 100% of your CPU time - install KB 927891, to be released as a standard update in May or June 2007. If you add this patch, you should also manually update to the update client WSUS 3.0 and pray.


Everyone who has recently encountered the Windows XP error


should know that this problem with svchost.exe (an executable file that is started to run all kinds of processes that depend on dynamically linked libraries) went away as soon as I updated the drivers for the Hewlett-Packard printers and scanners.

Update May 2007: If your generic host process error is related to Hewlett-Packard drivers, a solution is also explained in KB 821690.

or HP may be replaced by Hewlett-Packard. The subdirectory normally has "update" in it, and you should find and run an EXE file that connects you to the Internet and updates all the drivers automatically. Alternatively, you may try to search for the drivers for your HP device on the Hewlett-Packard website.

In fact, later I found out that I discovered a wheel: Microsoft agrees that the old or expired HP drivers are responsible for the bug. A Hewlett-Packard page offers a more complicated explanation that you will hopefully avoid. It is likely that the microscopic reason of the bug is that the HP drivers incorrectly interact with the firewall.

The major broadband ADSL operators recently had to increase the security because of a worm in Shanghai but believe me that you are probably not infected. If you are, see this Microsoft page.

Update: The update that you may install from the page under the link "Microsoft page" in the previous sentence removes the "generic host process" error in 50 percent of cases/users regardless whether you're infected by a worm or not.

If you're sure that you don't have such a problematic HP software, try to look for other similar programs that might try to be contacting their companies and be killed by the firewall. If the problem appeared suddenly, we are probably talking about your provider's firewall. If you did something yourself, turning your firewall off could also circumvent the problem.

In the past, the same error was also caused by another problem whose fix is described on another Microsoft page, KB 894391, but it is likely that most people already have installed these hotfixes. But if you have encountered this error message since you installed Windows XP SP2, the Microsoft page will almost certainly apply to you.