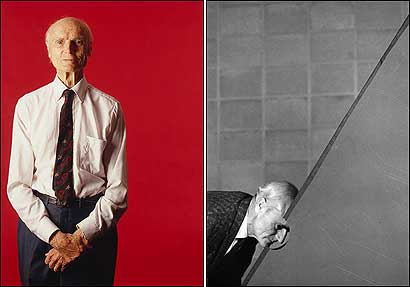 
but the famous mathematician is actually peering into a giant kaleidoscope on the right picture. ;-) The article

offers an interesting view on Coxeter's contribution to the defeat of formal Bourbakism and the revival of geometry and the links between mathematics and physics in which Coxeter played an important role, by finding all these cute concepts that connect algebra with geometry. It's not surprising that Escher was his friend.

Michio Kaku about the war

Incidentally, baba has pointed out an article about the

written by Michio Kaku that will appear in a November issue of New Scientist. The title itself is funny - especially if I forget about all the vicious terrorists and their evil acts that Not Even Al-Qaeda has in its repertoire. ;-)


Kaku explains that fashions have always played some role even in physics - and they have influenced string theory negatively - but the truth is ultimately decided by other things than blogs, computer operators, or beauty contests. He says that the modern world is spoiled and impatient, and offers examples of theories that had to wait. He also summarizes why string theory is the only game in town.

The content won't be too new for the readers of The Reference Frame but Kaku's style may be very refreshing.
Luboš Motl v 6:21 PM
Share