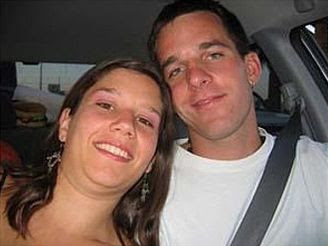 Ms. Ana Elisa Toledo (24) from Sao Paolo has been fed up with her boyfriend, Mr. Martin Novotný (23) from Česká Lípa, a Czech town, for several months - especially because he often turned violent in their relationship. Both of them had worked as au-pair in Denver. She has eventually decided to move on. He couldn't stand a picture of her hugging another man on her website.

On December 13th, 2005, he came to the house of the family where Ana worked through the window. When she woke up, he "blacked out" and hurt her repeatedly with his knife. She was screaming so he placed a pillow over her face and used his knife again. I didn't want to tell you but he stabbed her 74 times; the experts say that you only need half a minute if you get mad. He returned home to have a shower and to throw away the dirty clothes and knife. The same day, he decided that he can't escape from this trouble, so he called police and confessed to the murder.


What a frustrating story. He will probably avoid the death penalty and get a life in prison - the same verdict as for another Czech who killed his female countrymate in Sweden in 2004, and another Czech who killed a 17-year-old student in Germany. All these killers are in their mid 20s. The only exception was Václav Plch who got life in prison for a brutal murder of a black mother of five back in 2000: he was 39.

Both Martin and Ana were intelligent, peaceful, but also extremely jealous and passionate. Ana has even visited Martin's parents in Česká Lípa and they had no doubts that she would never live with someone else than their son: unfortunately, they were probably right. My deep condolences to the Brazilian family.
Luboš Motl v 2:50 AM
Share