The leaders of the EU countries
to negotiate about Russia and the external energy policy of the union. I think that the only leader who approaches all these questions entirely rationally is the Czech president Václav Klaus. The differences could hardly be more obvious. 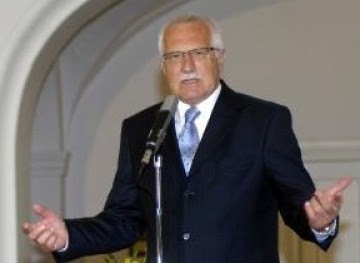 The average leaders offer cryptic comments about the deteriorating situation of democracy in Russia. Klaus, on the other hand, doesn't see any great problems with the Russian democracy at this moment and he argues that the situation is as expected given the Russian history and good in comparison with the era of the Soviet Union.


The average leaders tend to propose various bans on different kinds of energy sources in the EU. Klaus argues that the EU countries shouldn't depend on Russian energy that much and the restrictions on the allowed sources, including nuclear and coal-burning plants, make the situation worse. Some restrictions of this type in the past have already made the European position weaker and they were mistakes.

Balkenende and Blair have sent an alarmist letter about the global warming that will breach the tipping point in 15 years, as they suggest. Klaus replied:
According to a different article, Klaus said:
Luboš Motl v 3:56 PM
Share