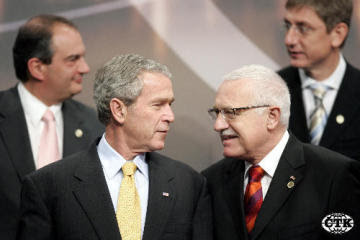 Figure 1: Bush and Klaus in Riga before taking a family photo today. You can see a similar picture with the left guy replaced by your humble correspondent. ;-)

The U.S. president has assured his Czech counterpart that he will work on the visa issue that has been annoying for many people including your humble correspondent, despite some expected friction in the U.S. Congress.

More than the required 3% of the visa applications from the Czech Republic are rejected - more precisely, it was above 9 percent in 2005 - which is the technicality in which the member of the EU doesn't satisfy the U.S. criteria for visa-free tourism. Americans can visit Czechia without any visas.

You can see that with the number of visas I had needed in the past, the probability that at least one of them would be rejected was about 50 percent. Add collapsing assets due to market turmoils, harassment by left-wing radicals and by aggressive organized crackpots, and many other things to be sure that no one should have been jealous about my situation. ;-)

I think it is fair to say that it is really the Democrat Party with their labor market protectionism who is responsible for the asymmetric harassment of countries like Czechia. If the security were the only issue, Czechia as a solid ally would probably face no problems.

My additional personal suspicion is that some people in the U.S. also want to avoid a possible inflow of Roma Czechs which was also the primary reasons why the visas for Canada were re-introduced for all Czech citizens in the mid 1990s.

Canada decided to screen itself from such an inflow so that the country could go on to hypocritically pretend that they're such nice people ;-) and that it is surely others who is responsible for any problems that the ethnic minority could might be facing.

See other articles about Klaus and Bush and on this blog.
Luboš Motl v 11:03 PM
Share