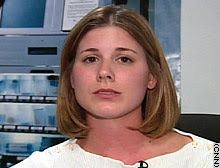 As a high school senior, Jennifer Gratz was dreaming about the college in Ann Arbor. Instead, she saw several classmates of hers who were not as good at school as Jennifer was but whose skin color was more worthy of encouraging. They were accepted but she was not.

Jennifer eventually studied mathematics at a less prestigious college in Michigan, namely in Dearborn. But the experience with the reverse racism that contradicted everything she was taught about justice was a reason why she decided to sue the university several years ago. The results of the lawsuit were mixed.

That's not the case of the polls today. Jennifer Gratz was the main local person behind the Proposition 2 in Michigan that more or less followed the Proposition 209 in California. The Californian experience of Ward Connerly who is African American was almost certainly helpful. The proposal passed and Michigan will become the third state in the U.S. after Washington and California that bans public institutions from discriminating against certain groups of people by using the so-called affirmative action.


The "Yes" votes banning most of the affirmative action programs received about 59 percent of votes, against 41 percent of "No" votes. "Yes" won roughly in 99 percent of the counties. If you look at these numbers, the question looks rather uncontroversial: the support of "Yes" was higher than in California.

It's a great victory for Jennifer: her team clearly won without any scare tactics and dishonesty. However, the battle wasn't easy at all because she was standing against a whole machinery of activists, NGOs, labor unions, companies, politicians, and even GOP representatives. The cowardly Republican officials of this kind may view the Tuesday's result as a well-deserved punishment. Also, many people told her that they agreed with her but they couldn't say it loudly: this topic has been covered by a thick layer of hypocricy and intimidation for many decades. The obstacles she had to overcome are described in an article by Harry Stein.

Also, a guy called Massie from an opposing group aptly called "By Any Means Necessary" pulled his knife halfway out of his pants during a meeting to show Jennifer what was at stake. But even if you forget about these organized nutcases - who will probably continue to poison the atmosphere - and only look at the "mainstream" attitudes, don't you think that something is wrong with the atmosphere in the society if you effectively cannot publicly defend opinions that are supported by 60 percent of the population and majorities in 99 percent of the counties?

Jennifer Gratz becomes the Reference Frame's hero of the day and we wish her happy celebrations. The members of various committees in Michigan don't have to be worried about all kinds of biases that have been expected from them. They should no longer be expected to be biased because such a bias will be illegal. Game over. ;-)

The Congress was taken by the Democrats. The Senate was thought to stay Republican, although the difference was infinitesimal. Among the four final GOP states - Missouri, Tennessee, Virginia, Montana - Dems needed to win three. But they lost Tennessee and they will lose Missouri (46:50), the Frame projected incorrectly. It seems that the Democrats will win in Montana and Virginia by a few votes and take a tiny majority in Senate, too.

The late Democratic surge in Missouri was incredible and without any extra indications, it suggests that the districts where people can't count well vote for the Democrats.
Luboš Motl v 5:40 AM
Share