Smetana and My Country: Alaska

The video has nice pictures from Alaska and exceptional background music by Bedřich Smetana, the Czech national composer. Nevertheless, their combination may be viewed as a manifestation of ignorance and insensitivity because the true message of the symphonic poem Vltava (The Moldau) is entirely lost.

In reality, the composition describes the Czech national river, Vltava, from its two springs to its junction with Labe (The Elbe). Vltava is the national river because it is largest among the rivers whose whole length fits into the Czech lands.

At the beginning, you hear a single flute whose tones are quickly increasing and decreasing and oscillate like the waves on a heterotic string. That's nothing else than Teplá Vltava (The Warm Moldau), one of the creeks that is finding its zigzag path through the hilly meadows of Šumava (The Bohemian Forest) and that is licking its grassy shores in Southern Bohemia.


Another flute joins the first one after a few moments: that's Studená Vltava (The Cold Moldau) that has added its forces to Teplá Vltava near Mrtvý Luh (The Dead Lea). Both of them meander in between the swamps until the melody culminates by the wide and lofty theme of the children song "Kočka leze dírou, pes oknem" (The cat is crawling through the hole and the dog through the window, see 0:25-0:48 of this video) that represents the true pillar of the whole symphonic poem. This theme that has also inspired Samuel Cohen, the author of the Israeli national anthem, is a clear sign that Vltava has spread its molecules into the wide area of Lipenská přehrada (The Lipno Dam) whose construction was apparently predicted by Smetana years before it started.

The river is getting stronger. At 4:00 we hear some Czech countryside themes as the river probes the celebrating villages South of the capital: yes, it is a wedding and the bride seems to like polka. Vltava continues through the forests in between the proud castles and chateaux standing on the hills. During a moonlight scene, water nymphs are dancing around. Vltava is slowly approaching Prague around 9:00. At 10:00, we hear the original C-major theme of the children song. 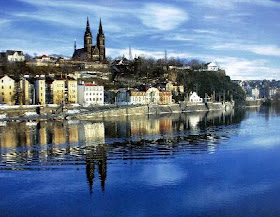 At 10:20, the old Vyšehrad Castle appears on the right side as you can figure out from the tones of another symphonic poem of Smetana's that belongs to the My Country 6-part package, namely Vyšehrad. In the last minute, the river leaves Prague and slowly joins with Labe that disappears into Germany in the North, and that's the end of the story.

Bedřich Smetana was chosen as a competitive national composer by the Czech intellectual movement even though he (Friedrich Smetana or Frederick Whipping-Cream, if you wish) could only speak German until he was 60 years old or so - and he became deaf soon afterwards. Antonín Dvořák who was 17 years younger than Smetana was a real patriot and while in the U.S., he was genuinely homesick. Nevertheless, the roles had already been decided. I posted this comment because they were just playing Vltava on a Boston's classical music radio station.
Luboš Motl v 12:30 AM
Share