Hugo Chávez, a key member of the rogues' gallery of the current world and a charismatic communist, has won six more years to transform Venezuela into a communist totalitarian country (61 vs 38 percent). The victory is a result of his oral skills and recent high oil prices that oil-rich countries such as Venezuela enjoy. Here he is with some of his friends. What kind of hovada they are. ;-) 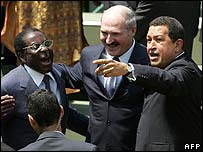 Venezuela has become The Bolívarian Republic of Venezuela in 1999 when he took over. In practice, this means that the country is a soon-to-be Stalinist and anti-American dictatorship that follows the ideology of Noam Chomsky, among others.

Linguistically, it is named after Simón Bolívar. This important Latin American politician and the author of the first important 19th century Latin America constitution was a huge supporter of the free market and an admirer of the American revolution. He was reading books by Adam Smith, one of the main intellectual pioneers of capitalism, whenever he could. Moreover, Bolívar was viscerally hated by Karl Marx. 175 years after his death, his name has been hijacked by the communists. Poor Simón Bolívar.

Meanwhile, Auguste Pinochet who saved Chile from the development towards communism under Salvador Allende, a Marxist president who brought a 500% inflation and supply shortage to the country, and who had to introduce a highly problematic yet temporary rule of a military board responsible for many wrongdoings - a board which, however, made Chile thrive - has suffered a massive heart attack. The Reference Frame wishes him a speedy recovery.
Luboš Motl v 4:22 AM
Share