As you may know, it was Baby Jesus - or Ježíšek - who brought Christmas gifts to the Czech children for centuries. The people in Austria and at least some regions in Germany agree: the gifts are brought by Christkind - the Christ child. Even though he should normally be invisible, you can find his picture at some websites: 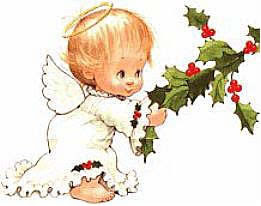 Well, Christkind is actually female, unlike Baby Jesus, but the American readers will agree that it is not a serious difference.

The San Francisco Chronicle has a very entertaining article about the opposition faced by the fat, ugly, red guy who is now being successfully re-imported from America. I say re-imported because Santa Claus is a mutation of St. Nicholas who was promoted by the Dutch colonists in New Amsterdam (NYC). The modern Santa Claus was invented by CocaCola in 1931 to match the company's colors. He's now 75: congratulations!


In Central Europe, St. Nicholas should bring presents on December 6th and you should read "Nikolaus", a German blogger's story about him; in Czechia he - called Mikuláš - does so on December 5th in the evening, together with a devil and an angel. Neither of them looks anything like Baby Jesus. :-)

Dinah Spritzer didn't forget about the similarity between Santa Claus and the Grandfather Frost - Děd Moróz or Děda Mráz - who has been a relatively unsuccessful Soviet invader for 45 years. I personally can't distinguish Děda Mráz from Santa Claus.

Děda Mráz was unsuccessful despite the attempts of the second Czechoslovak communist president, Mr. Antonín Zápotocký, who explained in his 1952 Christmas radio speech - before he was elected - that the Baby Jesus got older and became Grandfather Frost: a textbook application of Marxist dialectics and the unity of contradictions. He also argued that the children of the working people were no longer born in barns and that the country was ready to pay the debt to comrade Stalin.

The San Francisco article also informs about the leaders of the Czech movement against Santa Claus whose website is at anti-santa.cz. The picture of Virgin Mary above is taken from that website. The website is arguably more entertaining than its Austrian counterpart, pro-christkind.at.

Recall that the Czechs are the most atheistic nation in Europe, perhaps together with the Dutchpersons. Well, I guess that unless the Baby Jesus becomes visible and gets a commercial facelift, the fat philantropic European American guy is unstoppable, especially because the current Czech president is both a free market advocate as well as Santa Klaus himself: