Angela Merkel, a German physicist and chemist, has visited Prague today. While the German chancellor is trying to lay out a roadmap to revive the EU constitution during the 6-month-long German presidency of the EU, the opinions are somewhat different in Czechia, Poland, and the United Kingdom. 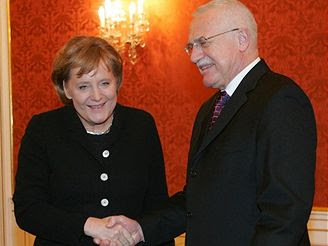 In her friendly and productive discussions with president Klaus, Merkel has shown a good grasp of the Czech history. According to Merkel, Klaus is a new kind of a hussite who also likes to fight over every theological millimeter. Wow - I didn't know the exact length scale myself, and even Klaus was impressed and he apparently understood Merkel's comment as a compliment. :-)

Figure 1: Hussites, except for the guy in the middle who might be a crusader. Picture taken in 1420 or so.

Recall that the hussites were Czech communists, protestants, and terrorists in the 15th century who built on the teachings of John Huss, an early reformer burned in 1415, and whom most Czechs are proud about. They liked to intimidate the opposing armies - usually the crusaders - by their songs and they have eventually combined their millimeters to grasp a big chunk of Germany, up to the Northern Sea.


The leaders disagreed about some quantitative details - by six orders of magnitude. Merkel thought that the EU constitution was also a fight for some new millimeters while Klaus thought that the constitution would be a jump by a few kilometers. :-) Despite these differences, they stressed that they are going to lead Europe in the same direction. The Czech-German relations are considerably warmer than 10 years ago when the Czech-German declaration was signed. I think that the main difference is not so much the declaration but the fact that Helmut Kohl was a sourball. :-)

According to Merkel, the prime minister Topolánek has produced a very interesting framework for future detailed discussions about the constitution: the boss of the Czech government has publicly identified the constitution as a pile of crap :-) and he praised Merkel for her "courage" to talk about this document which Merkel understood as a compliment, too. :-) 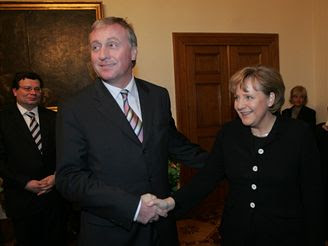 Note that the prime minister's approach is a moderate one in comparison with the Czech president whom Merkel met later.

Topolánek has also mentioned that the document must be more readable and understandable for people. Yesterday, president Klaus has met its Polish counterpart, Lech Kaczynski (only one of them), and they agreed that the absence of a constitution doesn't create any kind of a crisis that would have to be solved by some radical and fast decisions: the document that has been rejected by France and the Netherlands is not to be used, it is not to be accepted, the presidents agreed.

While Klaus and Topolánek agree about the EU constitution, they're very different people, of course. Klaus is an exceptional libertarian intellectual while Topolánek may be used as a textbook example of an average Czech (except for his height). While I undoubtedly admire Klaus much more than I admire the prime minister, I feel that it is somewhat natural in democracy to have a president who resembles the majority in so many ways.

Finally, the U.S. want to build the radar in Brdy and it should obey the Czech laws.
Luboš Motl v 11:57 PM
Share