Click the picture for more. News from the North American International Auto Show in Detroit (click for more): 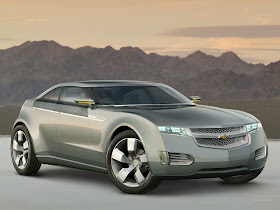 Chevrolet Volt can run for 40 miles on its lithium-ion battery before a small gasoline motor kicks in and recharges the battery. It is very quiet so it can quietly kill many people with bikes.

The car is also known as Chevy Joule/Coulomb or Chevy Watt/Ampere. Particle physicists call it Chevy 10-9 GeV/e and it is known to quantum gravity experts as Chevy K where K is a pure numerical constant in Planck units.

General Motors used to be the number one carmaker in the world. However, this spot is gonna be seized by Toyota, a company that plans to produce 2,500 copies of Toyota Matrix M-theory in 2007. Volt may be a modern enough answer to M-theory from GM. But what about Cadillac Matrix String Theory?

If you believe peak oil, the system of Chevrolet Volt is not good enough for you. Instead, you should invest $117,000 to buy a Venturi Astrolabe with these nice :-) solar panels. It can run up to 110 km/hour.

Finally, if you think that all these electric car fans are somewhat insane, you may prefer an ordinary car. What about Mazda Ryuga? It is a flying car.