Chips with 65-nanometer transistors have been around for some time. It turns out that to get a new speed boost, you need a material that can withstand the higher currents. 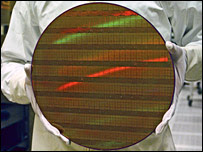 This amounts to a material with a higher "relative permittivity epsilon_r" - which the commercial sector usually calls "the dielectric constant k". While the vacuum has "k=1", silicon dioxide (SiO2) that has been used for decades has "k=3.9". There are better materials with higher values of "k":

The higher "k" allows one to make the circuits thicker. We were surrounded by silicon dioxide for decades. It could disappear as early as 2008 when most producers start to incorporate the 45 nm technology into their chips. Note that if the linear dimensions shrink by a factor of 45/65=0.7, the areas decrease to one-half. Intel hasn't yet revealed what frequency the chips will have. When was all this miniaturization first predicted? It was in 1959 when Richard Feynman noticed that there's plenty of room at the bottom.