This text will be mostly about Dr. Heidi Cullen, a photogenic climate specialist at the Weather Channel, her ideas, and the ideas of her soulmates. Because the percentage of global warming believers among the meteorologists is way smaller than what she would like to see - meteorologists actually work with some data on a daily basis and they know that what usually matters in weather is weather and not some hypothetical global trends - she has proposed to


Wow. ;-) This idea to eliminate a whole portion of the humankind from the public arena violates so many basic rules of science, democratic society, and the rules of all these institutions themselves that I wouldn't believe that someone who is so visible has proposed it if I hadn't read it.

The weathermen's job is to forecast weather or interpret the predictions of others and they have nothing to do with some long-term climate theories even if you speculatively imagine that there could be something true about these theories of the so-called "global warming".

They have received their seals for entirely different things than their blind loyalty towards a belief system about the alleged catastrophic human influence on the climate. They are supposed to tell us what the weather is gonna look like tomorrow or in three days and they do it well in most cases, although certainly not in all cases.

This is not the first sign that the climate change hysteria starts to build on the political traditions of Germany during the 1930s and 1940s. One month ago, Heidi Cullen had a "very special" guest on her "The Climate Code" TV show: Dave Roberts. She introduced him as an energy eco-expert although I hope that most people would agree that a more correct description would be a person who needs a professional medical help: Dave Roberts of the Grist Magazine has proposed a death penalty for the global warming skeptics that would be decided after Nuremberg-style war crime trials for these bastards. ;-)

Well, that must be a very refreshing idea for all these Al Gores and similar proponents of politicized science who have never denounced Roberts' suggestion. Quite on the contrary, they actually started to use the term "global warming denier" in order to invoke a similarity between the climate skeptics and holocaust deniers. Well, I am not calling for anything but I would have some moral understanding for the decision of a son of a holocaust victim to assassinate Al Gore for these outrageous comparisons.

Why don't they directly say that all of us are Jews? This would allow them to deal with us much more efficiently than the post-war Germany could have dealt with the Nazis. ;-)

Fine. Let us transcend the absurdity of all these ideas and ask: Are their Nuremberg-style trials a great and fair idea? Well, I think it would be very sad if we had to repeat all this history once again but if it has to be so, I will try to do it as fairly and faithfully as possible. The first thing that we - the deniers - should do in order to fairly reproduce the past events that have led to the trials is to put all the inconvenient people to gas chambers. Sadly to say but Heidi Cullen, Al Gore, and millions of people who harbor them would have to be among the first ones. ;-)

In these discussions you sometimes don't know what is meant as a bad joke and what is serious. So let me emphasize that the previous paragraph is a bad extension of a bad joke. Unfortunately, I am afraid that Cullen and Roberts are quite serious. Unfortunately, I must say that their ideas about a new clean-up of the society are driven by a paranoic ideology that is as perverse as its Nazi counterpart. If they're really serious that they are ready to sacrifice the very basic principles of democracy for their belief, all of us should probably start to be much more cautious about this movement. And that's the memo.

Our Finnish e-friend called this topic "Endlösung der Skepticfrage" - the final solution of the matters with skeptics - and offered a better picture: :-) 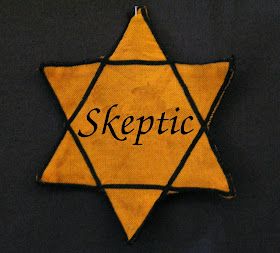