State of the union: Bush was shining II

Last year: "Bush is a genius". The far left-wing nutcases have essentially forced me to rename the article to "Bush was shining". 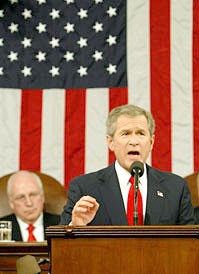 The State of the Union address has just ended. First of all, let me say that I was jealous about the good mood and atmosphere among the participants. Happy, friendly, and smiling faces were everywhere around. And yes, I consider George Bush himself to be one of a small set of people in the hierarchy of influence that can be relied upon.

In principle, it was approximately the same kind of an event as some of the FAS faculty meetings at Harvard University. And George Bush gave a similar kind of speech as Lawrence Summers used to give. Except that most of the FAS faculty never applauded to the big principles and friendly remarks of Lawrence Summers. I feel that most of them are kind of evil and negative people, unlike the lawmakers.

Some observers have noticed that the atmosphere in the Congress was actually more friendly and bipartisan than during Clinton's era. You may ask who is responsible for this improvement if you think it is an improvement. ;-)

Alberto Gonzales didn't attend the event. He was chosen to be the guy who would become the U.S. leader if the terrorists succeeded in exterminating the whole government and lawmakers of America. ;-)

George Bush started extremely politely at the very beginning. He was very proud that he was the first president who could say "Ma'am speaker". Nancy Pelosi was pleased, too. Very touching. You wouldn't believe that it is the same Nancy Pelosi who will start with her outrageous global warming committees and fights against John Dingell and others as early as tomorrow morning. ;-)

Bush praised the great economy, 7+ million jobs that have been created, and the significant & faster-than-expected decrease in the budget deficit that he wants to eliminate entirely. He argued that the inflation was low and I am sure that many economists would disagree with him. I disagree myself.

Meanwhile, Hillary Clinton was smiling. I think that she is much more ready and suitable to become the U.S. president than Barack Obama, among other examples. The Reference Frame appreciates that she has served as the president of college Republicans, too. Her father was a Republican executive in the textile industry - almost like mine - and she knows what capitalism is. ;-)

Bush has spent some time talking about the healthcare and the No Child Left Behind act that should be renewed because it is a very good law. Some of the specific proposals about the health insurance sounded confusing to me because I am simply no expert. What I understood is that he wanted important decisions to be made by patients and doctors - a principle that was greeted by a bipartisan ovation. I guess that this was not the first time when this assertion occurred in the annual speech.

In the section about immigration, Bush proposed temporary work permits to disentangle relatively innocent immigrants who come to America to work and earn some bucks from the smugglers and other criminals. He said that both animosity as well as amnesty for the illegal immigrants who are already in the U.S. should be avoided.

America seems to depend on foreign oil which can be influenced by the terrorists. So Bush has enumerated a couple of technologies that should be improved and strengthened - clean coal, hybrid vehicles, clean diesel, biodiesel, nucelar power (I accept the Southern version of the word because Bush seems to insist that it is correct), and ethanol production. In 10 years, the gasoline consumption should drop by 20 percent, he argued, and extra goals up to 2017 have been proposed. The strategic reserves should be doubled. The last sentence of this section ended up with the term "global climate change" and Bush essentially said that it will be solved if his other points are accepted, which is clearly incorrect but which I find acceptable enough a compromise about this particular stupidity that some profoundly confused people consider to be one of the most important problems facing humanity.

Bush had to drink some water, too.

Federal courts should have enough judges. Several success stories about the fight against terrorism were enumerated - like the stopped attack against L.A. and some victories of the British allies. Organized Sunnis and terrorists - and even the Shi'ias - are bad guys who dislike democracy and America must support moderate governments and democrats with a lowercase "d" in the world. The ultimate goal is to protect the American people. Bipartisan ovations, including Nancy Pelosi, followed.

Some 2006 setbacks in the Middle East were mentioned but Bush still hopes for victory and everyone should. The goal in Iraq is to make the country safe, democratic, and allied. 20,000 extra troops have to be sent, mostly to Baghdad, and their task is to clean the terrorists with their Head & Shoulders. Applause. Some 92,000 troops should be added in total but I didn't listen carefully what he exactly said about them.

America can't afford to lose in Iraq because of a nightmare and a big conflict of all possible extremists that Bush described in detail. The success in the Middle East may count as the most important task in America's history. Bush asked the Congress for its support and judging by the bipartisan applause, he got it. The president warned that the war on terror is a generational event that will last even after most of the people in the room are gone.

Civilians should be allowed to serve in these critical conflicts and Bush wants to create some civilian reserves. The good world and the United Nations are on America's side. Israel should co-exist with the state of Palestine. America must support good guys in Cuba, Belarus, Burma, and Darfur, and fight HIV/AIDS in Africa and malaria in 15 African countries. That will require some money. America's help to the world reflects the generosity of its people.

Four heroes who attended the event were introduced to the Congress: an NBA player who was born in Kongo and who has paid for a hospital; a female founder of Baby Einstein Inc.; a black worker who has saved a kid; and a white Sgt Rieman (with one "n") who was injured but continued to fight within the mantinels of the Euclidean geometry. The last guy was awarded the silver star.

America is a fine and decent country, the state of the union is strong, and God bless.

While the president's speech was precious, nice, and constructive, the Democratic answer of Jim Webb was confusing, confrontational, and destructive. He focused on the differences. In the context of the economy, Webb offered a rather distasteful form of economical populism: the economy may be strong but it is not "properly shared". All jobs are outsourced, all services and tuition are more expensive than ever before. Also, Webb argued that the U.S. government has the duty to protect the American bureaucrats and provide them with an unrestricted fattening station. Webb has explained that this goal will be achieved because of the Democratic control of the House. ;-)

As far as foreign policy goes, Webb thinks that we have seen four years of mismanaged war. Jim Webb has proudly shown a picture of his father who was a war hero. Jim Webb himself served not only in the navy but also in the Reagan administration before he became an unpleasant leftist: thanks CIP for a correction here. Webb has enumerated a few American G.O.P. presidents who disregarded recommendations of their advisors. America is now a hostage and it has paid staggering amounts of money and blood, we were told. A majority of the public, military, and the Congress opposes the war and Webb has recommended a quick exit from Iraq. I hope that Hillary doesn't share this opinion with this Gentleman. Finally, Webb has pleased the American public with some historical anti-corporate fairy-tales. Webb think that Bush will either join the Democrats in their fights or they will show him the way, whatever it exactly means. ;-)

The Virginia voters should be kind of ashamed to have sent this guy into the Senate instead of George Allen. Nevertheless, Webb's somewhat painful speech can't diminish the positive and constructive tone of the State of the Union address.