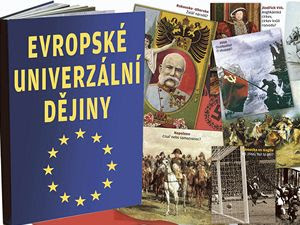 Annette Schavan, the education minister of Germany - the country that will lead the EU until the end of June - has proposed something that seems to be a typical bureaucratic mission creep, using British politicians' terminology, and an example of the unrealistic imperial ambitions of certain people in the EU. She wants all children of the EU to learn from the same history textbook. Not even a German chancellor who reigned in the 1930 and 1940s was able to do something like that in his empire.

What she wants is a synchronization, forcible coordination, making equal. German readers know that the correct translation to German is Gleichschaltung. 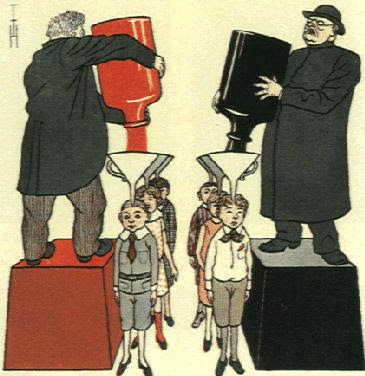 It would be much easier - although not easy - to unify the education of mathematics or physics although it's not quite clear what such a unification would be good for. But Schavan is more ambitious so she chooses the subject that is clearly the most difficult one to be unified: history.

In my opinion, that's a sign that she has no sense of reality.


The European Union has 27 member countries and this number keeps on increasing. However, a normal history teacher spends about 1/2 of her time at school with their own national history. It is completely correct that they do so. Who should know the Irish history if the Irish don't? There are two things that Schavan can mean: it's only the universal history that she wants to unify; or it is all of history.

What does it mean? She effectively wants to eliminate nations from the intellectual map of Europe. For example, she wants to reduce the time dedicated to the Czech history at Czech schools by a factor of 13.5 or so - and this ratio will be increasing. I have deliberately chosen an average EU country so that the calculation is easy.

How the hell are they gonna learn the history of the Czech Kingdom during Charles IV's reign or Hussites or National Revival or anything else if they have 13.5 times less time to learn? She clearly wants all young citizens of Europe to know 13.5 times less about their nations than their parents. It's just so mad that I would immediately become a huge opponent of the Czech membership in the EU if this were approved.

It's not just about eliminating national histories: the different interpretations of events are another major issue.

Although there are many historical events that are described in a similar fashion by many countries, it is certainly not all of them. An attempt to unify history textbooks - the "Histoire Geschichte" project - has already occurred but it only included France and Germany: about 13.5 times easier task than the full EU task. Of course, it didn't work at the end because the French morons wanted to be critical towards the U.S. and friendly towards the communists after the Second World War. This part of the textbook remained different in the two language mutations.

Other two "details" where the French and German historians disagreed were the Christian church ;-) and the French colonial history. See the Telegraph.

The French would try to insert pro-communist, anti-American propaganda to the textbooks of other countries. Armies could no longer be celebrated - or described in an intriguing style - as long as they fought against someone else in Europe which is what 90% of them did. There are roughly 26 issues that are similar to the French example and that I don't even know at this moment.

The British and the Poles oppose it. I hope that others will give a proper thrashing to this proposal, too.

What will have to be unified

In the textbook, we will probably learn that the U.S. entered the war by occupation of Normandy in 1944 but the Yankees were finally stopped by heroic allied French and German forces near Pilsen, my hometown. ;-)

This one was easy. There will be more subtle chapters.

It will be interesting to read the universal truth about the contributions of Czechoslovakia to the Munich Betrayal, the voluntary merger of Austria with the Third Reich (Anschluss), Germany being attacked by Poland or the Soviet Union, and the war reconstruction of London using the V2 bombs.

A chapter - one that the Slavic students would appreciate - could be dedicated to the Slavic expansion to the West against the dovish Germanic tribes. A politically correct team of historians will tell us nice stories about the friendly collaboration during the battles of Waterloo, Leipzig, Austerlitz (Slavkov), and Verdun. We will probably learn that John Huss has burned himself in 1415 and Joan of Arc was a heretic, after all.

The French and the English will finally reach harmony about the Hundred Years War. The Britons and Spaniards will finally agree whether the Undefeatable Army was undefeatable. The Germans and the Poles will agree about the triple split of Poland. The textbooks could finally recommend the Britons to return Gibraltar to Spain.

Czech and Polish historians will happily report about the Polish attack on the Czech lands and the subsequent happiness of the Czechs who saw the Poles being chased away by the Germans.

Marxists and Leninists had a hard time to create semi-unified history textbooks whose only goal was to make the working class look nice in the light of the historical events. I am very curious how the proposed textbook will present the history as an example of the European unity, especially if 95% of the history is about the European non-unity.