Hot women not allowed in optics?

In the 1950s, women were not allowed to enter the building of the physics department of Princeton University because the head of the department believed that they were a distraction. ;-)


Although the chairman's assumption was right, the rules of the game have changed. Women are not only allowed but they are welcome in the physics departments and they, in fact, control many of them. This includes attractive women, too. I know quite a few. While they can still be a distraction, it's the other people's problem, not theirs - if it is a problem at all. Their new right is to distract or not to distract, to become a scientist or not to become a scientist, to dress as men or as women, according to their choice.

But everything can change again in 2007. 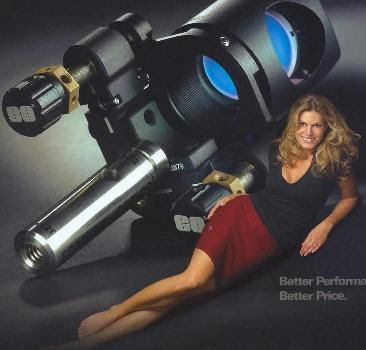 After this cute ad promoting Edmund Optics appeared in Physics Today and other places, some powerful forces started to think about returning to the policies from the 1950s. It seems that the person on the picture is actually not a generic hired outsider but an expert so it is her fate and her rights that are being debated here. Again, I have no general reason to doubt that she is their employee because I know similar experts in other fields of physics and engineering.

However, a radically "progressive" blog started an incredible campaign against Edmund Optics: they send a lot of complaints and encourage their readers to send complaints, too. Although that blog claims that the young women should be welcome at all possible places of physical sciences and engineering, there is one place where they're simply not allowed: on photographs that represent these companies. And maybe they're not allowed to look like women even if they're at work: they're a distraction, after all. ;-)

Cosmic Variance argues that even if another commercial of Edmund Optics features a semi-naked young man, it will still not be enough. It turns out that the only acceptable people at the company's photographs are ugly old white males! Who could have thought? Well, the employee on the photograph may want to go into hiding mode because the "progressive" activists are going after her.

Does Cosmic Variance realize in what situation they bring the attractive expert from the photograph? The main reason why they're creating problems to her is that they believe that all women in science and engineering must be unattractive, frigid feminists. But that's not the case. According to all the laws, the U.S. constitution, as well as common sense, attractive, hot, mainstream, straight women are welcome, too!

JoAnne argues that the person on the photograph has crossed the line of "professional attire". I wonder whether she doesn't think that her criticism is a bit painful. Imagine your humble correspondent criticizing Arnold Schwarzenegger that by showing his muscles, he has crossed the line. I would feel painful, indeed! ;-)

Many great people have fought for the dignity of female scientists. For example, one of Richard Feynman's famous paintings was "Madame Curie Observing the Radiations from Radium". The message he intended to convey was, nobody thinks of Madame Curie as a woman, as feminine, with beautiful hair, bare breasts, and all that. They only think of the radium part. (Quoted from Surely You're Joking, Mr Feynman.) And Sean Carroll suddenly wants to undo all this and make all female scientists feel like ugly, unattractive geeks again.

I hope that neither the blonde mechanic nor the company gets intimidated by these radicals. And don't forget: if you need optical components, think about Edmund Optics. Britney Spears should think twice whether she wants to stay in semiconductor physics. And Louise Riofrio should get ready that her fellow cosmologist will go after her, too. ;-)

When we're talking about commercials for optics, you may see how they sell eyeglasses in Germany. Disclaimer: you are only allowed to click if you're older than 21 years.

Bonus I (via Prof JM whom I added to the blogroll):

Girls of engineering 2007: a video promoting a calendar