Because the hype about the bizarre physicists sold as "critics of string theory" has already faded away, many journalists must find something else, comparably or even more dumb, to write about, something that would satisfy their instincts to misinform their readers.

The following "story" is a good example showing how breathtakingly limited many journalists and their bosses are. An employee of LSU has posted the following press release on the LSU website:

The press release is full of nonsensical comments about his "quantum" explanation based on "distant stars". It is not hard to see that the correct first paragraph should have been

Every journalist who writes about the "twin paradox" should at least try to open the Wikipedia page about the twin paradox that explains quite clearly that there has never been any paradox. He should read at least one paragraph. Be sure that Wikipedia is reliable in more than 99% of similar cases, including this case in which the Wikipedia article is labeled as "needing attention of experts": in this sense, Wikipedia is a peer-reviewed source. There are hundreds of other sources that a casual journalist or Internet user may find to become sure that there has been no paradox to solve.

Twin paradox: in SR and GR


In special relativity, only the inertial observers are subjects to the same laws of physics. The guy who stays on Earth is approximately inertial, and he can correctly calculate that this brother will be younger because the wiggly time-like lines in Minkowski spacetimes are shorter than the straight lines. The laws for the other guy are more complicated.

The general theory of relativity allows us to use all reference frames, including the accelerated ones, but it is no longer true in general relativity that the "pace of time" is universal and only depends on the coordinate differences. Quite on the contrary, the "pace of time" in general relativity depends on the gravitational field - or the metric tensor, if you wish - and the two brothers simply see different gravitational fields which is compatible with the fact that their aging will be asymmetric. 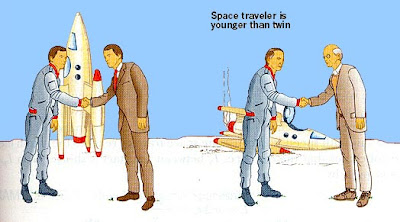 Every smart 15-year old kid who is interested in physics should understand these things. There is no paradox, there has never been any paradox, there is no quantum mechanics needed to understand what happens because it has nothing to do with quantum mechanics, and it is unlikely that the Mach principle based on stars could be revived - and there is no reason for such a revival. We either use the special relativistic approximation or general relativity. In both cases, we arrive at the same conclusion unless we make errors.

Happiness in the media

Nevertheless, this LSU press release has been celebrated - see news.google.com - by

They tell you that Kak has solved something that no one else, not even Einstein, could solve. You wonder whether these people actually believe that such a mad proclamation is likely: it certainly looks so. They want to believe it. Especially some of them want to believe it.

For example, you may see that Indian sources are over-represented. That's evidence that the journalists who belong to the same groups as the people who claim a "discovery" are much more likely to believe that the announced "discovery" is meaningful. To make the story even more impressive, the CNN-IBN story in India is rated by the readers. The average rating from 75 users is 9.5 stars: the maximum is ten stars. Well, this shows that about 95% of their Indian readers are complete ignorants about high school physics.

I assure the people in India who know what the "twin paradox" is and what it's not - for example high-energy physicists ;-) - that if they're gonna ignore these trends instead of trying to patiently explain the people around how science works, India may simply return to the trees.

A bonus: in order to show how educated, self-consistent, and brilliant the Earth scientists are, let me congratulate to Marcus Ross. He was just awarded a PhD: see Vancouver Sun. Marcus Ross believes that the Earth is as young as 10,000 years and his PhD thesis is about marine reptiles that disappeared 65 million years ago.

What do I think about it? I have not read the thesis but I have no reason to doubt the comments by his advisors that it's a good thesis. If it's a good thesis and if he satisfied other rules, he should be given a PhD. But unlike others, I don't think that having a PhD means that other scientists must take the person seriously, and I will personally continue to consider the Young Earth creationists to be nutcases.