A role model for green parties

Although I normally dislike opportunists such as Martin Bursík who has indeed been a member of many centrist and other parties, his party is still much more attractive than the typical green parties in the West. 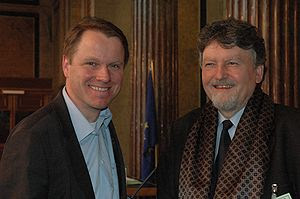 He was able to get them to the Parliament and to the government. He would never agree to join a government with the social democrats because such a coalition would have to be supported by the communists which he would find unacceptable. Instead, he chose a government with two conservative parties - libertarian ODS and the Christian Democrats - because "conservative" means "cool" and "progressive", at least in the Czech Republic.

The foreign minister - chosen by the Czech Green Party - supports the radar base in the Czech Republic and the meeting of the Czech Green Party took a neutral position and didn't even support the calls for a referendum about this question. The German Greens understand that Bursík's successful strategy was to avoid being a fringe party - and in the post-socialist world, fringe means left-wing.


Needless to say, there are also leftists in the Czech Green Party but they realize that without the centrist leadership, they would continue to be irrelevant water melons: green (environmentalist) on the surface and red (communist) inside.

Well, I happen to think that Bursík is not particularly green in any sense. He just realizes that there is a political demand for the green ideology but there are no good politicians in this field because more or less everyone who really believes these green things is a moron, so he benefits from this opportunity. ;-)

Another news from the Czech politics: it seems very likely that BAE systems has paid huge amounts of money in bribes back in 2001 before Czechia decided to buy supersonic Gripens from that company...
Luboš Motl v 6:41 AM
Share