Update: Some people - and maybe you - are searching for the
Back to the original article.

The global warming catastrophe has doubled in the last month or so. More precisely, we have reported that the phrase global-warming used to return 15,000 hits on news.google.com one or two months ago. Now it has 30,000 hits and the figure keeps on increasing. Only two of those 30,000 hits quote both Richard Lindzen and your humble correspondent: Foxnews (video) have followed CNSnews. ;-)

Today we celebrate the groundhog day in the U.S.: if a groundhog such as Punxsutawney Phil emerges from its burrow and if it sees clouds, the winter will soon end and warming will start. ;-)

To make it more confusing, the February 2nd is called "Hromnice" in the Czech Republic; "hrom" means a thunderclap. It has very important consequences for "predicting" the weather, too. The main animals responsible for the predictions are badgers, bears, gooses, and skylarks - no groundhogs. ;-) See the web page of the town called Hromnice.


Anyway, that's a great day for the IPCC panel to join groundhogs and to release the summary of their scientific work for policymakers:


Where is the scientific work itself? As we have explained in IPCC AR4, the climate scientists have improved the scientific method a little bit. In the past, scientists had to do their research before the implications for policymaking could have been derived from this research. It was very slow and inefficient. Who would like to wait for those slow scientists when all of us know from the media by now that the burning Earth is already evaporating? ;-)

Today, the vastly superior postmodern scientific method of the IPCC members allows them to publish the summary for policymakers first. As they told us (the precise quote can be found in the article under the IPCC AR4 link above), the technical justification - the scientific work itself - will be adjusted to agree with whatever conclusions for policymaking we hear today. The scientific report of the first working group will be released in May, more than 3 months into the future. We will have the opportunity to compare how it differs from the second-order draft linked in the previous sentence.

The error bars in their summary are smaller than before, including the error bars for their 2090-2099 predictions. Because the temperature and other quantities in 2090-2099 depend on many things that clearly can't be predicted - especially the scientific and technological breakthroughs of the 21st century - it is not hard to see that their 10% accuracy is completely unrealistic.


They don't seem to understand (or agree) that there exist various types of errors, especially systematic errors, and the statistical distribution of the outcomes of their computer game is just one source of the error among many.

Also, the report has changed some standards how to evaluate the confidence in science. Instead of 95% or 99% confidence intervals, they use 90% confidence. The probability that "A" (anthropogenic) belongs to "GW" (global warming) is 90%, the report effectively says: the verbal form of "more than 90%" is "very likely", according to a footnote. In all other branches of science, such a "high" confidence level would be viewed as a hint to start to consider a speculative hypothesis as a remote possibility: even the recent Higgs signal has a higher confidence. In climate science, 90% (calculated by not exceedingly transparent methods) is apparently enough to close the debate. ;-)

Just to remind you, 90% is the probability that a randomly chosen digit such as 7 is not equal to 7. :-)

Because the summary for policymakers is a Holy Scripture and the researchers now have 3 months to make the full report consistent, it is clear that they will have to change some rules of mathematics. Open the SPM, go to the page 5 of 21 and you will find Table SPM-0 there. The fifth line claims to be the sum of the previous four contributions to the sea level rise. However, for example in the 1993-2003 column, it would require 0.16+0.077+0.21+0.21 to be equal to 0.28 instead of 0.657. Note that with the value 0.657, the predicted value would differ from the observed value by more than five observed sigmas.

Also, the sum of four terms seems to be 5-10 times more accurate than the error of the Antarctic contribution. What a miraculous way of adding things. ;-) An average climate scientist would fix these problems simply by adding some random zeros to the Greenland or Antarctic contribution, to obtain an agreement. However, you can't mess up with the summary, a Holy Scripture. So what must happen according to their rules is that the full report will prove that 0.16+0.077+0.21+0.21 = 0.28. I am sure that they will find some climate scientists if not mathematicians who will defend the consensus that this sum is different than your calculator would expect. ;-) I hope that many people will be looking forward to this new breakthrough in mathematics proving that the climate change is more catastrophic and the underlying science is more solid than anyone has ever anticipated.

Correct answer? Hint: the Antarctic contribution is actually significantly negative but it wouldn't sound too good to the policymakers.

Error via Sean Davis (sum) and Stuart Staniford (error margin), readers of RealClimate. The sum-error was confirmed to be a bug by Stefan Rahmstorf. 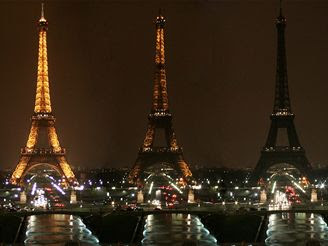 On Thursday, before the report was released, cities like Athens and Paris turned off electricity at various place for five minutes; see the Eiffel tower above. The spokesman for Czech President Klaus, Mr Petr Hájek, described the official opinion of the Prague Castle: "You talk in categories of holocaust deniers which is clearly absolute nonsense. If you were right, we could return to the trees and deny the whole civilization. The 'five minutes without power' campaign is a ridiculous political event and people who believe these warnings are naive. We can't see obscurantism [in Czech: darkism] in natura frequently but this is an example."

The AEI think tank wants people to study the IPCC report carefully, and offers $10,000 for good critical reviews of the report. Some journalists recently wrote rather distasteful articles about the AEI and this award, and the president of AEI answers here.
Luboš Motl v 1:12 PM
Share