Design a vacuum cleaner and Richard Branson will give you 25 million USD.

Figure 1: A large, floor-mounted "zero emission" or "low emission" system is going to cost about \$250,000. These systems are popular in Southern California. This is a three-cycle vacuum vapor degreaser system from Branson Ultrasonics. These systems are often purchased where air quality regulations make the use of traditional, open-top cleaning systems impractical.

The only subtlety - one that makes the previous paragraph and the picture useless - is that the vacuum cleaner must suck greenhouse gases from the atmosphere. As you know, the planet is facing emergency called the global warming. For example, New York state is under 100 inches of snow only, Arizona had its coldest January in 28 years, and Colorado had the coldest January ever. I hope that the wise reader who wins Branson's contest will dedicate 1% of her award to the blog. ;-)

For example, you can try to create a working model of a synthetic tree by Klaus Lackner (click): 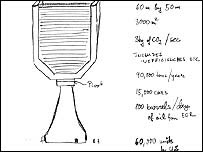 Many people are already trying to solve the homework problem. How do I know? Well, many of them Google for is there a way to extract carbon dioxide. ;-)


A postdoctoral guest blogger of politically correct sex at RealClimate uses the contest to attack Paul Crutzen, a Nobel prize winner, because his proposal is not about removing the dirty species called homo sapiens and his dirty creation from the face of Gaia but instead about adding something. ;-) Well, this is how the environmentalist radicals think.