Czech President explains his views on the IPCC panel

Update: Václav Klaus is just visiting Japan and his Japanese notes contain a message to the American non-Al-Gores. Please distribute the link if you like it.

Václav Klaus, the second president of Czechia, is an avid tennis player. 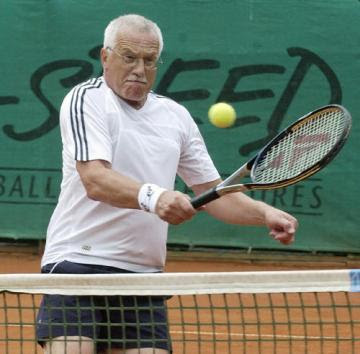 But today, he became a victim of friendly fire. Andy Roddick, owner of the fastest serve in the game today, targeted Klaus' chest with a tennis ball. ;-) Even though the bodyguards proved to be useless under these circumstances, the leader of the Czech Republic survived while America defeated my European homeland in Davis Cup.

This experience hasn't stopped Klaus - who currently enjoys 82% support of the citizens - from analyzing the international climate panel of the United Nations (IPCC). In an interview with "Hospodářské noviny", a Czech financial daily, Klaus answered a couple of questions (well, more precisely, the interview took place yesterday although it was published today, on 02/09/2007; the translation from Czech to Czenglish is due to your humble correspondent):

This page was the 8th hottest page of the global blogosphere on Feb 13, 2007. See also conversation tracker. Besides a thousand of blogs, a special report at the Drudge Report, and the Washington Times - where congratulations from James Inhofe were also reported - the interview was publicized at Foxnews (video).

Well, it seems to make a lot of sense, Prof Klaus. Other parts of the interview were devoted to the Organization of European States (and Jo Leinen, MEP), the Czech civil cold war that has already ended, a possible radar for the U.S. missile defense, and the president's relationships with the new Czech government.

Show postings on this blog that contain the word Klaus such as Klaus' talk at Cato or Klaus' letter to the U.S. Congress.

See also The Great Global Warming Swindle documentary and the most important fact about the ice core: co2 lags temperature. Sunspots and cosmic rays seem to be correlated with temperature much more closely than CO2.