What ambitious tasks the physicists who don't work on the theory of everything want to solve? One of the greatest dreams outside string theory is to create the invisibility cloak. ;-) 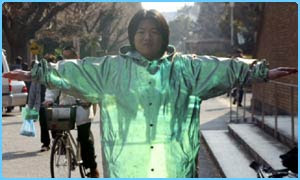 One of the experimental leaders in this field is Prof Harry Potter and his sometimes underestimated female collaborator, Prof J.K. Rowling: we have learned that at least the Gentleman must be cited during all talks about this topic. However, the main person who should become invisible is the statue of Peter Pan. Prof John Pendry of the Imperial College in London has just given a captivating colloquium about the question of invisibility.

How do you become invisible? Prof G.G. of Harvard has proposed mirrors. He has seen many magicians who become invisible by putting mirrors around them. However, this trick only works if these magicians are observed from a particular direction.

Finally, you may try to design various cloaks. Prof Pendry's cloak is the optical counterpart of barriers in the river: water flows around them, pretending that they don't exist. How do you construct such a cloak?

The annulus in between the radii "r" and "R" contains a particular kind of devices or metamaterials - a concept explained below - that makes the whole object of radius "R" invisible. The light simply goes through the large disk in such a way that it avoids the core altogether. How does it work?

First, as we have indicated, you need all optical rays to avoid the small ball, just like when water flows around a disk. If you remember the linear regime of hydrodynamics, you know that there is a conformal (angle-preserving) coordinate transformation that maps the full two-dimensional space to the full two-dimensional space with a disk removed. This conformal transformation is relevant for determining the trajectories of water flowing around the disk in the non-turbulent regime.

How do you force the photons to go along the path you want? That's a more general mathematical problem: the invisibility cloak is a special example of this problem. Let's try to find a configuration of epsilon(x,y,z) and mu(x,y,z), the permittivity and the permeability, such that the electromagnetic rays will propagate along paths that are curved but look completely straight in some different set of coordinates - for example the coordinates in which the full space corresponds to the full space without the ball of radius "r" in the normal coordinates.

That's a pretty well-defined task and it turns out that there is a solution. You can derive that "epsilon(x,y,z)" and "mu(x,y,z)" must actually be equal to one another. Moreover, you can solve the differential equations that realize a given coordinate transformation - for example the coordinate transformation needed for the invisibility cloak. The last steps you need to make is to construct the configuration of materials with the right "epsilon(x,y,z)" and "mu(x,y,z)" that bend the light rays exactly in the required way so that you become invisible.

If you think for a little while, the general method may work not only for screening against the "radiation field" but even against static fields of electric charges and magnets.

If you look into your catalog of materials, you won't find any that have "epsilon" = "mu", especially not with the unusual values that the solution to the differential equation above requires. Will you give up? No way. You will create your own material. In fact, you need something more general than a material: you need a metamaterial.

An ordinary material is composed out of atoms or molecules. Their properties averaged over the volume whose size is comparable to the wavelength of light determine the behavior of light in such a material. If you think about it, one wavelength is rather long in comparison with the molecule. That's especially the case if you only want to become invisible by radio waves. At any rate, you have a lot of room to engineer your own metamolecules that react in a particular way to the electromagnetic field. These metamolecules must be smaller than the wavelength but you are still allowed to give them much more general properties than known simple elements or compounds can have.

To construct the cloak, you actually need "epsilon" and "mu" smaller than one. You can see that their refractive index is also equal to "epsilon" and equal to "mu" if the two Greek letters are set equal to one another as explained above. Therefore, the required refractive index can be smaller than one. That would mean that the velocity of light exceeds the speed of light in vacuum. Normally, you would say that this can't happen because of special relativity.

The frequency dependence will inevitably cause some dispersion, making the invisibility cloak imperfect, especially if you deviate from the frequencies for which the cloak was designed. But Prof Pendry argued that this effect may be kept small for a pretty broad band of frequencies. This statement sounds somewhat surprising but because he didn't define too quantitatively how broad band can be realized, I can locate no sharp contradiction here.

So how do you build the metamaterials? He is a theorist but has shown a couple of technologies that have been actually constructed by experimenters: various magnetic moments are created by the external field and their characteristics may differ from conventional materials. These metamaterial exist. It is possible to make the permittivity negative, among other things. If you combine these technologies, you may produce the materials needed for the invisibility cloak and the cloak itself. Once again, it can't be perfect at all frequencies but you can make it look good in a wide range of frequencies, he says.

There are many applications of this general technique - commanding the electric and magnetic lines and electromagnetic rays where to go, for example:
Most of the colloquium was about theory but at the very end, the speaker has simply disappeared! ;-)
Luboš Motl v 10:25 PM
Share