The borders between territorial waters of Iraq and Iran have never been defined. Ten days ago, the story started. In the dangerous and ill-defined waters, fifteen British marines were kidnapped by Iranian paramilitary units. It is plausible that some influential forces in Iran have been planning an act like that for a long time.

Needless to say, they were on the Iraqi side according to Great Britain. The British officials have even drawn their own map that proves the point: 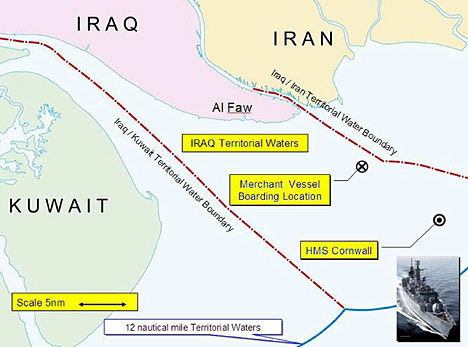 The borders were invented by the British professionals and they have no legal power. But I, for one, accept this map drawn by relatively trustworthy friends from the EU. ;-) According to Iran, the marines have trespassed the borders and showed six other critical points shown on this detailed map.

The marines were closer to the Iranian territory but it's not quite sensible to view it as a crime if the borders are not defined and if it occurs hundreds of miles from the land. At any rate, a hostage crisis started.


The internal politics of Iran is much more complex and non-uniform than one would a priori expect. That makes all things difficult. Moreover, the Iranian government is extremely good in manipulating stupid people which includes, for example, the majority of the Arab nations. So they forced the marines to apologize for their wrongdoing on TV and to praise the Iranian kidnappers for their heavenly hospitality that they will be always grateful for. The only female marine has even apologized in a written form - in a letter that she originally wrote in Persian. Not bad.

I think that the number of Westerners who would buy such an inexpensive propaganda - one that is probably even cheaper than the aggressive crackpots' presentation of theoretical physics - is small but it is enough to fool most Muslims because they misunderstand how the world really works and how easy it is for a propagandistic machine to fool inexperienced ordinary people.

When you take these things into account, the West is simply losing the propaganda war against the lunatics in the Iranian government. It's losing the hearts of the Muslims who are getting brainwashed, radicalized, and united. To be fair, this story increases the unity of the West, too. It will probably help to increase the ratings of Blair and Bush. The article about Bush's new reaction to the crisis is the most read article on news.BBC.co.uk. I think that many people in Britain are scared.

The U.K. finds itself in an awkward situation. Tony Blair must be really angry if these mad people are abusing his fellow citizens to produce this propagandistic garbage: he has my sympathies in this case. The British behavior is ambiguous - they even call it a two-track path to victory. I don't quite understand this approach. It seems to lack any strategy or tactics. They don't seem to know what should happen tomorrow or next week. They don't know how to make something happen.

On the other hand, I have a feeling that the Iranian jerks are in charge of the situation and they have correctly calculated that every day similar to the last 10 days helps them.

If the British don't want to enter any confrontation with Iran that would simply force this troubled country to move wherever it's necessary, they should simply apologize, get the marines back, and make everyone forget the apology as soon as possible. The intermediate stance leads to a lose-lose situation. The marines are not freed and Iran can use the trouble to point out the British weakness and increase its influence in the region.

I think that this comment of mine is analogous to what I think about the crackpots' attacks against physics. Either you admit that the dumb aggressive crackpots are in charge of the situation and much like in the Middle Ages, it has become de facto impossible to both work on pure science honestly and to walk on the streets - which I started to think some time ago - or you believe that the situation is not that bad in which case you must be very sure to explain the reality, explain why the crackpots are crackpots, why their proclamations are silly lies, and why they have nothing whatsoever to do with the actual questions in theoretical physics, and stop their disgusting propaganda war.

If the British government is not ready to apologize in this situation where the innocence is ill-defined, they have only one alternative rational approach to make some progress in this story which is some kind of forceful response. Using Churchill's words, the forceful response is "not necessarily war, but war if necessary".

But I am afraid that thinking that a peaceful reaction that nevertheless fails to satisfy ever increasing demands of the Iranian leaders for concessions will lead to progress is foolish. The British should decide whether they're in charge of the situation and if they're not, they should give up, apologize, and think about steps that will prevent similar humiliation in the future. 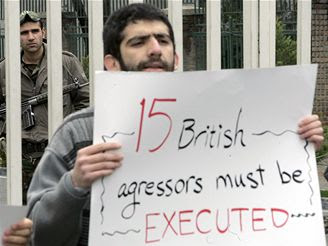 Figure 1: Some Iranian students - like those on this demonstration - are really nice people.

For those who enjoy Russian speculations: a 12-hour-long U.S. bombing campaign "Bite" (or a synonym) against Iranian sites with nuclear risk might occur on Good Friday, April 6th, between 4 am and 4 pm and its main goal would be to return nuclear developments in Iran by a few years.
Luboš Motl v 3:24 PM
Share