Gliese 581 has a habitable planet

Gliese 581 is a star that is 20.5 light years from us. It is smaller and colder than the Sun: in fact, it is a red dwarf. That's why habitable planets may be much closer to the star. 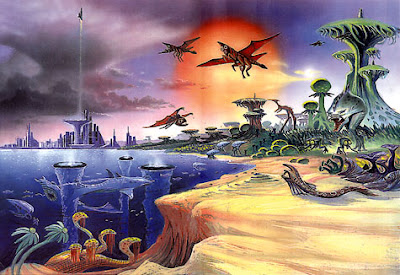 Gliese 581 c is a planet whose radius is about 1.5 times the radius of Earth. The planet is 14 times closer to the star than our distance from the Sun. But because the star is so much smaller, the planet is expected to have temperatures between 0 and 40 Celsius degrees which is pretty pleasant. Indeed, you can see liquid water on the satellite photograph. ;-)

The Wikipedia article about 581 C informs that a few hours ago, intelligent radio signals arriving from the planet were detected. ;-) This information was added by a witty editor from statefarm.com.

See news.google.com or a video (the first 20 seconds is a commercial).
Luboš Motl v 2:37 AM
Share