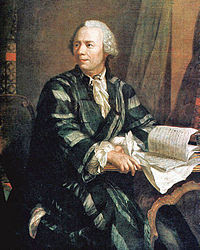 Leonhard Euler was born in Switzerland exactly 300 years ago. He introduced modern notation for many functions and sums, figured out how to exponentiate complex numbers and why exp(i.pi)+1=0 which is, according to Richard Feynman, the most remarkable formula in mathematics.

Euler has understood the calculus of variations and the derivation of Euler-Lagrange equations. The Euler-Bernoulli beam equation turned out to be critical for the design of the Eiffel tower. Euler has put Huygens' wave theory of light on firmer ground, thus peacefully reducing Newton's corpuscular authority.

Euler and his friend Bernoulli liked to debunk Leibniz's monadism, a fuzzy philosophy attempting to avoid quantitative laws. For similar reasons, Euler disliked the teachings of Christian Wolff that were "heathen and atheistic". Euler believed the Bible literally.

Euler was an eminent string theorist. He introduced the modern complex formalism for Fourier series describing the vibrations of a string and, as Larry pointed out, has solved a large number of partial differential equations relevant for oscillation of strings and drums (membranes).

Moreover, Euler has calculated the scattering amplitude B(u,v), also known as the Euler beta function, for four open-string tachyons 250 years before Veneziano. He has also computed the index of many moduli spaces of string-theoretical vacua, the so-called Euler characteristics.


Euler's favorite worldsheet approach to perturbative string theory were the so-called ghost pyramids. He was the first one who has calculated the key formula that counts that central charge of the ghost pyramid (up to a trivial extra factor of 32). The article about this identity is the featured article on the main page of Wikipedia today. A simple modification of the identity leads to the calculation of the zero point energy of a string and the critical dimension - calculations that Euler wasn't able to complete.

Euler has discovered three angles that parameterize a general SO(3) rotation and allow one to write down the path integral for a spinning top, something so incredible that Bert Schroer couldn't believe it as recently as in 2006.

There are more than fifty concepts named after Euler and I can't enumerate all of them here.

As you can see, Euler was quite an impressive mathematically-inclined string theorist who was ahead of his time. He counts as the most prolific mathematician of all time and a guy who wasn't stopped by blindness. I wonder whether back in the 18th century, aggressive crackpots were attacking Euler for not being sufficiently scientific just like they do today.