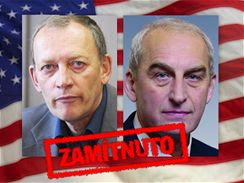 Two Czech lawmakers, a communist deputy and a Christian democratic senator, were denied U.S. visa for their trip to the Marshall Islands where they were invited to see how the missile defense radar works.

It is hard to avoid mixed, mostly negative feelings. It would be a kind of fun if a communist were denied the visa for being a communist except that it's apparently not the case. They were rejected simply because they didn't submit their documents early enough: for purely bureaucratic reasons.

I view it as a typical example of the system being overrun by uncontrollable bureaucracy. If the U.S. thought that the radar base were a good thing for its national security, it should be completely obvious that trivial formalities such as visas for foreign lawmakers who will help to decide about the fate of this base should be completely circumventable.

The fact that it's impossible to avoid these bureaucratic misunderstandings even under these highly special circumstances shows that something is wrong with the system. The U.S. government or ambassadors should have the right to unconditionally allow entry to the U.S. in special circumstances and this situation should be an example.