Four years ago, the loop quantum gravity was excited about an asymptotic limit of neutral black hole quasinormal frequencies that was apparently proportional to ln(3). See

They were hoping that this mysterious number ln(3) could shed some light on a strange multiplicative factor in front of the black hole entropy, a number needed to remove a discrepancy - the Immirzi discrepancy - in their calculation of the black hole entropy. They were dreaming that their theory could also claim to pass this highly non-trivial consistency check, much like string theory, and - in the most optimistic scenario - become another candidate for a theory of quantum gravity.

Later it turned out that their hope was parsecs away from reality: the numerical predictions were in fact wrong on both sides. The calculation of the entropy in loop quantum gravity was entirely wrong because of several important technicalities that the original paper miscalculated and the corrected calculation had nothing to do with ln(2) or ln(3). Also, the asymptotic quasinormal frequencies of black holes except for the simplest black hole were not equal to ln(3) times the Hawking temperature as predicted but something completely different. And just to be sure: it was a very different kind of difference than in the previous error. ;-)

Nevertheless, it is true that the asymptotic real part of the scalar and gravitational quasinormal frequencies of the Schwarzschild black hole is equal to ln(3) times the Hawking temperature. The result - originally predicted by Shahar Hod using the methods of numerology and later speculatively connected with discrete models of gravity by Olaf Dreyer - was first proven to be exact by your humble correspondent using continued fractions of Nollert et al.

Later, we proved the same result by a more flexible monodromy method with Andy Neitzke. This method allowed dozens of people to calculate the same frequencies for many other black holes, different kinds of perturbations, and modified theories of gravity in different dimensions.

But there has been another funny line of developments in this otherwise not-too-profound subfield of theoretical physics: higher-order corrections to the simple ln(3) result. If the modes are not quite infinitely damped, the real part is a little bit different. A. Maassen van den Brink has calculated the first corrections to the frequency. An amusing feature of his result was that the coefficient was proportional to a rational multiple of a rational power of pi multiplied by the fourth power of Gamma(1/4) - quite a complicated number.

Tonight, Hsien-chung Kao from Durham and from Taiwan decided to calculate the second order corrections. They turn out to be a rational multiple of a rational power of pi multiplied by the eighth power of Gamma(1/4). That's not too surprising. But the path to the final result is kind of impressive and the coefficients of the wavefunctions are much more convoluted beasts. His or her calculation has about 60 equations. Let me post the equations number (53) and (54) - two identities that are used to obtain Delta_{2d} in a "straightforward" way: 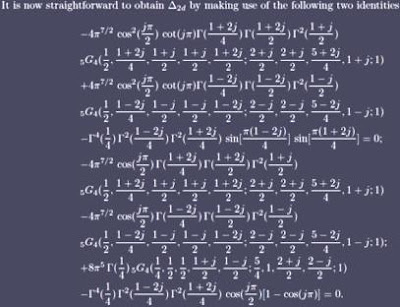 Yes, the identities are octic in the Gamma function and include generalized hypergeometric functions that depend on 12 arguments, besides trivial ingredients such as trigonometric functions. Let me admit: I don't know how to prove the identities above. The remaining 60 steps or so are similar. Note that this whole problem is still essentially classical general relativity.

Quantum gravity is more complex a beast and solid mathematics, special functions, and abstract mathematical concept play much more an important role in it: indeed, string theory makes the story much more exciting, diverse, rich, and less mechanical. Nevertheless, in a sharp contradiction with the opinion of many people who pretend to be scientists and who brainwash many other people who pretend to be science fans, general relativity and quantum gravity are not about drawing octopi or organizing witch hunts driven by idiotic medieval comments about testability and by mentally retarded journalists.

General relativity and quantum gravity are about a very careful mathematical analysis of equations and mathematical structures whose relevance for this Universe has been experimentally proven decades ago, and about their mutual relationships.