Tropospheric warming not as fast as the surface

A weekly dose of peer-reviewed denier literature on the climate.

Christy, Norris, Spencer, Hnilo (ADSABS) have studied the temperature of the lower troposphere in tropics (-20...+20 latitude) during the 1979-2004 period in their article in Journal of Geophysical Research (2007).

They used two sources, UAH (University of Alabama in Huntsville) and RSS (Remote Sensing Systems). The nighttime trend is 0.12 K/decade while the daytime trend is 0.07 K/decade - a strange difference indicating that an adjustment may be needed.


The overall trend from UAH is 0.08 K/decade while the data from RSS give 0.15 K/decade. An elimination of the most "anomalous" entries in both datasets can of course bring them closer. At any rate, you see that the difference between the trends from different sources is greater than the magnitude of the detected warming according to one of them.

Moreover, they argue that the RSS data show a strange warming jump around 1992, indicating a particular bias, probably coming from a change of methodology around the time when the new NOAA-12 satellite was included. This makes the larger trend from the RSS data less robust. The authors continue to work on elimination of all kinds of both positive biases as well as negative biases - they have found representatives from both groups.

The authors finally end up with the following figure for the trend in tropics:


You can see that this interval is fully compatible with the conjecture that there is no tropospheric warming in tropics at all. On the other hand, it seems incompatible with the prediction of the greenhouse theory that the tropospheric warming trend should be 1.3 times greater than the surface warming: the surface warming trend is 0.13 K/decade while the troposphere is only 1/2 of it, and even when you add the error margin, it is still less than the surface trend and much less than the trend 0.17 K/decade predicted from the surface trend by the AGW climate models. 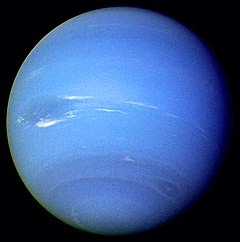 Neptune is warming, too

The readers of The Reference Frame may know that Mars, Jupiter, Triton, Pluto, and Earth recently experienced warming. You should add Neptune - another planet that is blue not green - to the list. Moreover, Hammel and Lockwood argue in Geophysical Research Letters vol. 34 that the trends on Neptune and Earth were pretty well correlated, indicating their solar origin.