On April 12th, 1961, Yuri Gagarin said "Poyekhali" (Let's go) and became the first person who was liberated from the terrestrial gravity. As the Czech poster below says, "communism has opened the road towards the stars". :-) 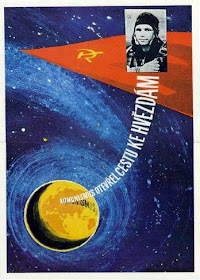 Nowadays, the spiritual heritors of the Soviets may create posters saying that "environmentalism has opened the path back to the caves." :-)

As kids, we were always taught to be proud that the first country that Gagarin visited during his world tour after he returned from outer space was Czechoslovakia. Seventeen years after Gagarin, Vladimír Remek who is now a deputy in the European Parliament for the Czech Communist Party became the first non-Soviet non-American citizen in space.

An official Czech song "Good afternoon, Mr Gagarin" is available in MP3. The official name of the song was actually "Honor to the astronaut". It took some time before Czechoslovakia adopted the Soviet terminology.

Honor to the Astronaut

Good morning, Mr major Gagarin,
we couldn't wait but now it is here.
The whole world drank wine red as your flag,
people were waving all of their hands.

I can't sing this fun song terribly well
because my voice is trembling like mad.
I have heard that you are twenty seven
and the world is as young as you are.

(In the translation, "Soviets" was chosen instead of "TASS", the Press Agency of the Soviet Union. I've exchanged "stars" and "Moon" to make "Moon" rhyme with "soon". Some articles were omitted to fit the syllables.)

When we mention Czech music and astronautics, most people know that Neil Armstrong played Antonín Dvořák's New World Symphony on the Moon. It is much less known that the Discovery space shuttle crew including Don Thomas liked to play Jaroslav Vejvoda's famous polka, Roll Out the Barrels (= Rosamunde in German = Škoda lásky in Czech).

Rae Ann was somewhat surprised that there was jazz in Czechoslovakia. Well, there has been a lot of fun music, movies, and culture. For example, you should see what was probably the #1 hit of the early 1980s. It was nothing else than Girls from our Kindergarten. They enumerate a lot of female names and describe how sexy the girls were and how they were getting older - but when you look back, those girls from the kindergarten were still the most attractive ones. :-) You can clearly see that there's no politics in it.

When they would make a cool fairy-tale, such as Three Wishes For Cinderella, Karel Gott would sing both the Czech version as well as the German version of the title song.
Luboš Motl v 8:13 PM
Share