Michael Griffin who has been the top administrator of NASA since 2005 said the following on NPR (see news.google.com, transcript, blogs, audio):

I have no doubt that a trend of global warming exists. I am not sure that it is fair to say that it is a problem we must wrestle with. To assume that it is a problem is to assume that the state of Earth's climate today is the optimal climate, the best climate that we could have or ever have had and that we need to take steps to make sure that it doesn't change. I guess I would ask which human beings - where and when - are to be accorded the privilege of deciding that this particular climate that we have right here today, right now is the best climate for all other human beings. I think that's a rather arrogant position for people to take.

I have always believed that the people who actually work with hard sciences and technology simply shouldn't buy a cheap and soft pseudoscientific propaganda such as the "fight against climate change". NASA has been doing many amazing and non-trivial things and they must also be irritated when pseudoscience based on such shaky and unscientific notions is given so much attention - in fact, breathtakingly, more than NASA's space program itself.

The ideology of a "fight against climate change" is based on a whole network of assumptions - dozens of assumptions each of which is highly questionable, to say the least. As long as we are a scientifically inclined society, each of these assumptions should be studied separately because rationally speaking, they are independent.

One of these assumptions says that the current climate is better than a different climate and it should be preserved. It is an arbitrary, irrational assumption that was also recently criticized by Czech president Klaus in his book, among other people.


Needless to say, a different kind of scientists such as NASA's own James Hansen responded in an irritated way. But NASA is not primarily the home of strange scientists who "prove" a 20-meter sea level rise using the concept of scientific reticence. 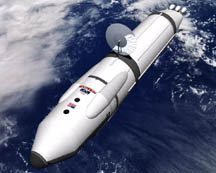 NASA is primarily the home of serious engineers and scientists who are doing some truly impressive stuff - besides the spaceships and devices telling us so much about cosmology, we also find climate-related activities including the stuff about the satellite measurements of temperatures and about cosmic influences on our climate. These are the real sources of NASA's natural authority: James Hansen is not.

The Reference Frame applauds Michael Griffin and encourages him to act as a self-confident boss of a highly prestigious institution. Let me re-emphasize that it is Griffin, not Hansen, who is the boss of NASA and this fact should be taken into account if it turns out that one of them should leave NASA. Any sign of weakness, Dr Griffin, will be used against you. More precisely, I would recommend the boss of NASA to fire Hansen for his despicable comments about his boss as soon as possible.

And that's the memo. (Via Bob Ferguson.)

But Griffin must be ready to act in the same way even if the pressure quintuples. Immoral politicians such as Bart Gordon as well as radical communists will suddenly invent criticisms of NASA's work. If Griffin can resist for three weeks or so, things will be OK.