NASA's Chandra X-ray observatory and terrestrial telescopes have detected the king of all supernovae, SN2006gy with mass estimated to be 150 solar masses, in September 2006. It was 240 million l.y. away and the brightness of the star was like 10 galaxies. The whole show took 70 days. Supermassive stars emit gamma rays before they die. 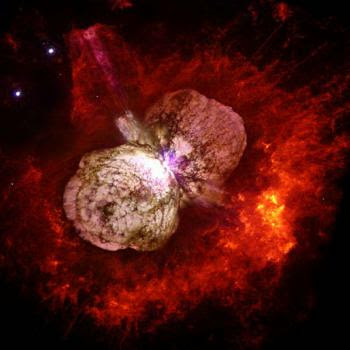 
Also, Eta Carinae, the most luminous star in the Milky Way, is expected to explode soon. It currently radiates as 5 million Suns and the eruptions may be isomorphic to what happened on SN2006gy before it went monstrous supernova. Eta Carinae could be the most spectacular explosion in the history of modern civilization, they say. Well, they probably mean the not-so-modern civilization 7000 years ago because this is when those things we are just observing happened. ;-) 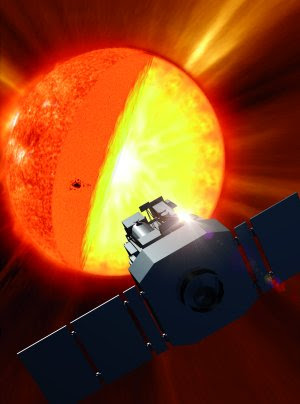 Figure 3: SOHO looks into the Sun.

If you care, the g-mode waves have been finally detected by SOHO on the surface of the Sun. I suppose that the term "g-mode" actually refers to "l=4" in the terminology of spherical harmonics where "l=012345" is called "spdfgh". Unless it stands for "gravity": anyone knows the answer? Although the strength of these waves whose origin is gravitational seems to be smaller than predicted theoretically, such a discovery could indicate that the core of the Sun is spinning and our star resembles a supernova. A similar conclusion could influence our counting of solar neutrinos as well as our ideas about the possible solar influence on the climate. See FoxNews.
Luboš Motl v 3:32 AM
Share