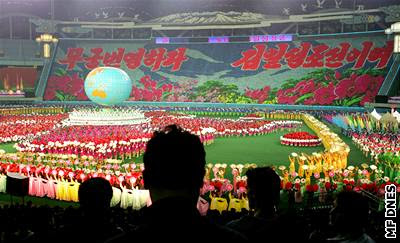 Click to get thirteen pictures by Mr Jan Zátorský from the MF DNES Czech daily. He has tried to find out whether the people really believe the communist orthodoxy or whether they just perfectly play it, driven by fear, but he has failed. It was impossible to find out anything. No foreigner can freely move in the country or ask questions to locals. Foreigners are not allowed to hold won, the local currency.

So what currency do you think is normally used by visitors and others in this country that looks just like the Stalinist states in the 1950s? It must be a sufficiently influential but sufficiently leftist currency. Yes, it's called the euro. ;-) The people in Pyongyang are grateful that they were allowed to live in that great city. Everyone looks serious and obedient. The pictures: