Bush ends his visit of Europe as a hero

People in the streets scream "Bushie, Bushie" and celebrate the leader of the free world. The U.S. is extremely popular in the country and Bush enjoys a 99% approval rate or so. Postage stamps with the Statue of Liberty and with George W. Bush himself are issued.

A street in front of the national Parliament is renamed to Bush Street. Citizens reach out and embrace Bush, grab at his arms, shoulders, and head, mussing his hair. The lawmakers say: "Please occupy us." Is it a fairy-tale? No, this is how George W. Bush was treated in the last country of his European trip. See NPR. 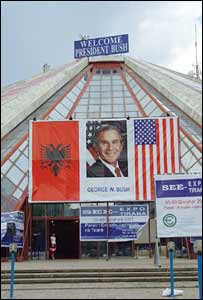 Now, I don't say that the Albanian opinions are identical to mine but they're undoubtedly much closer to mine than the attitudes of the obnoxious, anti-Bush, anti-capitalist, anti-American sourballs that seem to be everywhere in the rich countries.

Even though they are poor, I feel somewhat jealous because they still believe in the ideals of freedom. They surely don't have to think about the fact that freedom is also freedom for the politically correct and other freedom-haters.

The people in Albania also use cutting-edge technology, e.g. the laptop above, to worship George Bush.


The only "minor" problem with my happiness above is that it is excessively transparent why Albania loves America so much: it is because of the uncritical military and diplomatic help that the Albanian nation has been receiving from a Western, U.S.-led coalition against its Serbian neighbors. Treating the Albanian-Serbian situation in such a black-and-white fashion is simply pathetic.
Luboš Motl v 5:46 PM
Share