Bush in Prague: rockets not radars

The missile defense system will be one of the main topics of George W. Bush's visit of Czechia that starts tonight. What do Czechs think about it?

According to polls, a majority (around 60+ percent) opposes the radar base. But it's not necessarily the sensible part of the Czech population. The demonstrations against the base are usually organized by communists, Islamists, and "peaceful feminists" (which is fortunately not a numerous group). One of the rallies had to be moved to a less prestigious place. Thanks God.

On the other hand, the icon on the left belongs to the movement called "We don't want radars, we want rockets!". I sympathize with the movement. Reuters has released a report called "Prague has Cold War edge before Bush visit". They compare the current plans with a long history of powers occupying Czechia in the past and ask whether the citizens think that it's the same thing today.

The picture above shows Fidel Castro who has become one of the Czech advocates of the U.S. umbrella. The pro-American demonstration took place at the Prague Castle.

The Czech prime minister will assure Bush that Czechia is an ally but one that can't be directly controlled by a superpower. He will make it clear that the U.S. will have to pay the expenses connected with the radar otherwise the project is dead. 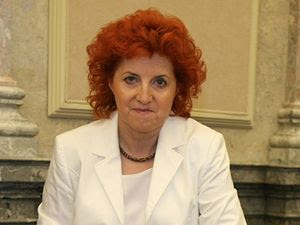 Ms Vlasta Parkanová, the Czech minister of defense, is a former jazz singer. She had a great idea to compensate the negative campaign against the radar organized by various kinds of commies. She asked Mr Jan Vyčítal, a songmaker who is also well-known for the most famous song of the first celebrations of liberation of Pilsen by the U.S. army that were held in 1990, for collaboration, and they created a brand new old song.

A highly unofficial videoclip of the new song. In the happy end, U.S., Russian, and Osama's nuclear bombs meet in the Czech Brdy Hills. ;-)

He used the melody of "Good morning Major Gagarin" (MP3) and both of them have recorded Czech as well as English version of the new song. Vyčítal only needed 10 minutes to create new lyrics - well, it's almost identical to the old lyrics about Gagarin. :-) I only see Czech lyrics so here's my translation:

The whole world heard the news from the free press,
the whole world suspended all its chats.
And I welcome you [Bush] by shaking you hand
and we turn all our eyes to the skies.

Tell the guys we know who has freed us.
Back then in May nineteen fourty-five.
And where Masaryk with Woodrow Wilson
helped our whole nation.

Good morning, the banner with stars and stripes...

I hope the actual English lyrics is better than mine. Bush will receive a CD of this authentic and moderate Czech socialist propaganda, with music stolen from the U.S., copied to modern conditions. :-)
Luboš Motl v 3:51 PM
Share