During his speech / full, Bush said that Russia under Vladimir which is how he proudly calls Putin was derailed from democratic reform tracks and that Russia has nothing to be afraid of. Countries like Czechia no longer have to choose who is their friend because both America and Russia may be friends, he said. Bush encouraged China to open its politics as much as it opened its economy. The Czech defense minister gave him her new CD, "Good Morning Mr Radar, we couldn't wait", a parody of a 1961 song celebrating Gagarin. :-) I can't almost hear her singing in it. She is much more quiet than Jan Vyčítal.

Lunch (photos). Bush was chewing a chewing gum for hours. When he saw some faces that looked surprised, he probably swallowed the chewing gum :-) because no one noticed that he would throw it away. The appetizer was a cheese roll with a honey-cognac sauce. Bush's eyes started to shine when he saw the duck with Czech dumplings and cabbage and he liked the lunch prepared by 30 cooks. Bush tried to smile at everyone and speak to everyone. For example, he praised the green tie of the environment minister, Martin Bursík, the chief of the Green Party. Well, this is somewhat characteristic about Bush's recent positions. :-/

In the afternoon's talk, freedom was Bush's most favorite word. Its attractivity is the most powerful weapon against terrorism. Freedom was given to us by the Creator, Bush said, and it is the only arrangement that leads to justice and human rights. The event "Thank you America" was attended by few hundred people. The anti-American rallies were comparable although they were much more heavily promoted in the media. 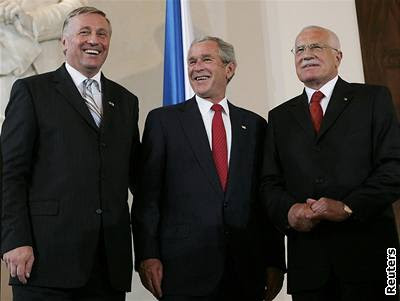