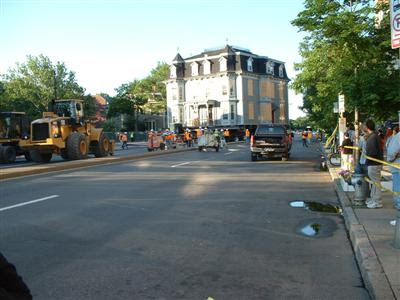 Mass Ave - a long road that goes to $+\infty$ (Atlantic ocean) in the East and $-\infty(0.6-0.8i)$ in the West has decided to reduce its carbon footprint. So they have built a Victorian house in the middle of the road. It's actually a great idea. Drivers may get discouraged and take a different route which will lower the CO2 emissions near the Harvard Law School which is a good thing, as consensus of scientists thinks. Amen.

Today I learned that at craigslist, bikes are much more hot than furniture. With 7 excited potential buyers in 1 hour, I should have started with a double price for the bike. ;-) The buyers were nice people but the Boston area is Boston area. The buyer of the kitchen table was a girl who studies environmental policies at Tufts and the buyer of the bike was a student activist of the Democrat Party from BU. :-)

These guys across the street have a much more straightforward approach to moving than your humble correspondent.

The Ukrainian House (see the picture), the Baker House, and the carriage house will be moved from the Harvard Law School area - where they want to build the Northwest Corner - to another street one block to the North - where they needed to demolish a part of the North Hall dormitories. The houses will be transferred on the wheels.

It's impressive but it's nothing like the Church of the Annunciation of the Virgin Mary (built 1517-1532) in Most, a Czech city, that was transported by 841.1 meters within 28 days by Czechoslovak engineers from Škoda Pilsen and Průmstav Pardubice, heroes of socialism, in 1975.

The speed was about 1-3 centimeters a minute and the whole operation gave communist Czechoslovakia a lot of new dirty brown coal to burn. The coal contains a lot of uranium so when you burn it, you release more radioactivity than any nuclear power plant except for Chernobyl ever can. 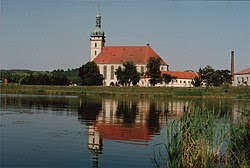 The building was mentioned in Guinness book of records as the heaviest building ever moved on wheels.
Luboš Motl v 12:14 PM
Share