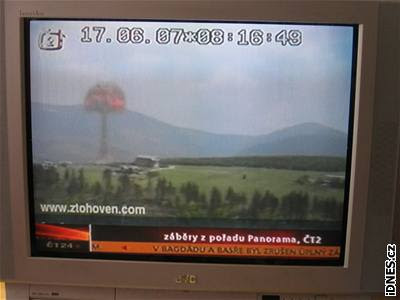 Those who watched a Czech public TV channel in the morning could have seen a nuclear explosion in the Krkonoše Mountains during an otherwise boring breakfast program that normally shows weather at different places, especially touristic targets in the mountains.

Who was behind it? No, it wasn't Putin. It was an artistic group called Ztohoven which means "away out of it" but it also sounds identical to the phrase "one hundred excrements". Most likely, Roman Týc was the main spiritual father. This time, they hacked a web camera. But they have already produced several practical jokes of this kind in the past, usually featuring a question mark that complains about the ability of media and commercials to manipulate people.

While the Czech TV wants to sue them, I tend to agree with some commenters that similar events are probably necessary to teach people how to doubt and rationally think about the news in the media.

Karel Schwarzenberg, the Czech minister of foreign affairs, argued in an interview for Austrian press that attacks against the Czechs have become a national sport of Austria. He said that the people who protest the Czech nuclear power plant are morons and that Temelín is safer than many German nuclear power plants simply because it is newer. 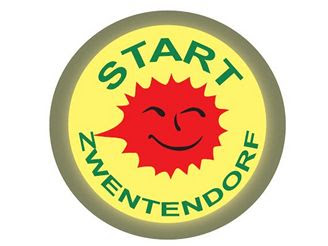 The Czech activists demand that the Austrian government protects the environment from pollutants produced by coal burning by a quick launch of the Zwentendorf nuclear power plant, 40 kilometers from the Czech border, which was terminated by 50.4 percent of the voters in a 1978 referendum. They will also be blocking the borders, using similar yellow costumes as their Austrian friends.

The treaty about the new plant should be signed in Melk, just like the treaties about Temelín, to make the place easier to memorize. Once Zwentendorf is running, the "Start Zwentendorf" movement will cease to exist and its agenda will be transferred to a new organization called "Start Zwentendorf block II". :-)