A blog post "Consistency" ("the essay") was written by a Western European physicist about consistency and self-consistency, and let me also mention a few words about it.

First of all, she is very correct that physicists - and especially those for whom English is not the native language - like to use physics jargon in everyday life. I certainly do. You may recognize a physicist because he will use words such as "canonical", "self-consistent", "effective theory", and many others well beyond their range of validity determined by the social conventions of the lay majority.

For example, you may want to Google-search for the canonical keyboard problem. Yes, there had to be someone who has promoted this problem described on my page as a canonical one even though the word doesn't appear in the article itself and I bet that he or she has been exposed to physics education, to say the least, unless he learned the word "canonical" from theology. ;-)

But let met get to the main questions.

This is a requirement that every scientific theory must satisfy. If a theory is inconsistent with observations, it's dead. I believe that this is such a simple principle that everyone understands it and it doesn't need any extra explanations and disclaimers except for this one: experiments may also be performed or interpreted incorrectly and it would be extremely foolish to think that experimenters themselves are infallible or even more infallible than the theorists which is certainly not the case.

The essay also talks about the adjective "self-contained" and she seems to confuse the two. The word "self-consistent" applied to the Hartree-Fock theory isn't really the same word that describes self-consistent theories although they are related. The correct word for the Hartree-Fock conditions for the wavefunctions would really be "self-contained" because the wavefunction appears on both sides of all equations: it helps to define the equations that the same wavefunction should solve. Moreover, the Hartree-Fock method is not a fundamental theory but a trick to get approximate results in a class of cases and the importance of self-consistency for such approximate methods is much lower than it is for fundamental theories. 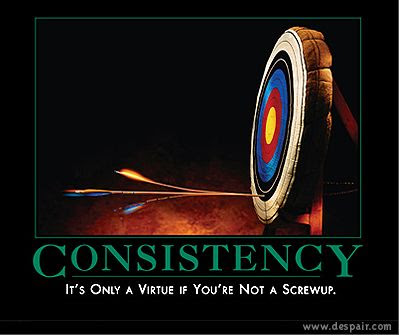 These requirements may sound as innocent tautologies but they are not. If one thinks properly, they are really enough to find unique answers to all physical questions in numerous classes. It has actually been done many times in the past and it could have been done in many others if people had been more rational, for example:

Some of these conclusions have been confirmed experimentally and some of them will be confirmed in the future. There are hundreds of more detailed conclusions that one can make by "pure thought" and that have actually been made by pure thought. People who think that physicists determine every fact about the physical world by looking at a new experiment in every case are incredibly naive.

Is the requirement of self-consistency an absolute one? Unlike the essay, I would surely answer "Yes" although this answer depends on the way how we talk about things. If we deal with an approximate theory, it only tells us answers to some questions with some error margins. But if we carefully write these errors as order-of-magnitude estimates O(y) - where y is a variable that can be shown to be small - the self-consistency must still be valid with the same errors. More precisely, it must be possible to prove that there can exist a precisely self-consistent theory that agrees with the approximate theory up to the specified errors.

Quantizing waves on the ocean

Ted Jacobson is quoted as saying that perhaps, gravity shouldn't be quantized just like waves on the ocean shouldn't be quantized. Many people pretend that this statement is a wise, alternative approach to deep questions. I happen to think that it is a deep misunderstanding of all of quantum mechanics and it is erroneous at every step, not only at the level of quantum gravity.

First of all, it is not true even in the case of water. Waves on the surface of the ocean are somewhat non-linear, highly interacting, and complicated in shape. They wouldn't lead to a simple Fock space. Because I want to avoid these complications, let us look at waves inside the ocean. Should the sound waves "be" quantized? Is the pressure of water in a given squared micron an operator that acts on a Hilbert space? You bet.

Every observable in this world is an operator. This fact has been established and everyone who is familiar with quantum physics knows that it has. Moreover, the behavior of squared microns of water is safely within the realm of validity of quantum mechanics. It has been tested there experimentally. It's not an extreme regime of any kind.

Are there differences between water and spacetime? Yes, there are. The main difference is that water carries a lot of entropy even if there are no waves. That's what liquids always do. The molecules are arranged chaotically which really means that they can be arranged in many ways and the entropy is high. The Hilbert space of the ocean is not a simple Fock space because even the hypothetical ground state is highly degenerate (it has many possible states in it) and complicated.

We know for sure that the entropy density of empty space can't be high. It is a time component of a four-vector; any nonzero value of it would imply a violation of the Lorentz symmetry. The Lorentz symmetry violation in empty space is tiny (experimentally) and I really think it's zero (theoretically). That implies that the entropy density of the vacuum is tiny (experimentally) and probably zero (theoretically). Moreover, a high value of the entropy density would almost certainly imply a high temperature. But we can measure the temperature of completely empty space. It is zero as opposed to 10^{32} degrees Celsius.

The people who imagine spacetime as chaotic liquid are not able to distinguish -273.15 degrees Celsius from +10^{32} degrees Celsius (the Planck temperature) or a vanishing entropy density from +10^{95} per cubic meter (the Planck entropy density). They are not really dignified proponents of fascinating alternative theories of physics. They are people who have completely misunderstood basic concepts in this science and if they continue to misunderstand them for years, it's too bad.

If liquid water is a bad analogy for spacetime, is there a better one? Yes, there is. Metals and crystals are much better because the ground state - a metal or a crystal at 0 Kelvin - is unique, much like the vacuum state of spacetime. That's why in both cases, the entropy density is essentially zero near the absolute zero. The Hilbert spaces of both systems can thus be organized as Fock spaces. The particles are called phonons in the case of metals and gravitons in the case of spacetime.

The vacuum is a kind of metal in the sense that the "atoms" are arranged in a unique way. The Lorentz symmetry (and even the full rotational symmetry) doesn't hold for metals (unless they are fine-tuned) but it holds for empty spacetime. That's a very tough constraint that makes the behavior of gravity more unique than the behavior of metals.

The world is a tightly constrained structure, a clockwork that works well even though it could a priori break down in millions of ways. The more we know about the world, the more ways how the world could break down we learn. This fact is the reason why careful theoretical reasoning is a sufficient way - and in many cases, the only realistically possible way - to answer certain questions. And the power of theory has clearly been getting stronger as people were understanding physics at a deeper level, especially if the level became less accessible to direct tests. In the long run, this process is guaranteed to continue.